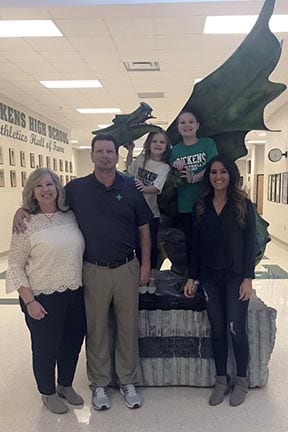 Last month the Pickens Board of Education approved the hiring of new boys basketball Coach Mike Duffie.   Coach Duffie comes to the Dragons with 29 years as a head coach and a pedigree that speaks for itself.  He is excited to be a Dragon and looks forward to hitting the hardwoods and getting the 2018-2019 season started.

Known as a “builder of programs”, Duffie has taken the opportunity at several High Schools to right the ship of some pretty dismal programs.  With 33 years overall in coaching, he started his career at Model High School in Rome GA. as an assistant Varsity coach and head JV coach from 1985-1989.  Duffie took his first head coaching job at Macon County High School in Montezuma, Ga in 1989 and his resume started to take shape.  As the boys head coach he led the Bulldogs to Sub-Region Champions in ’90,’92, ’93 and in 1990 had a State Quarterfinal appearance.  Duffie was named the 1-A Coach of the Year.

At the end of the 1993 season, Duffie took the reigns and ran as the Morristown East(TN) coach.  Coming off a 2 win season, the task was tough for Coach Duffie but he jumped in head first to turn things around.  The fruits of his labor started showing almost immediately in his second season.  The next three seasons saw consecutive Region Tournament appearances and a school record 24-9 overall season.  The Hurricanes had their 1st state ranking since 1979 coming in at 10th and several other first in the previous 18 years. Regular season Conference Champions, District Tournament Champions and Region Tournament Runners-up were all apart of these.  Duffie was also the Head Coach for the Lady Hurricanes Softball program during his tenure at Morristown East High School.

Gordon Central realizing their need to kick-start a program that was barely existing brought Duffie to do as he does, build the program.  Coming off a winless season, the Warriors were needing exactly what Duffie had to offer and he started in 1999.  In 2002, 7-AAAA basketball new that Gordon Central was back as the Warriors made it to the GHSA State Tournament for the first time in school history and a 20-6(first in school history) record for the 2005 season. Coach Duffie also started the Lady Warriors softball program and had a 20 win season in four short years of a new program.

The most recent head coaching position for Duffie was Dalton High School and his resume continued to be impressive. Beginning in 2006 until his hiring at Pickens High School, Mike Duffie had the Catamounts of Dalton at the top of their game. In his 12 year stent at Dalton, he had multiple Region Runner-up finishes and a sweet 16 showing.  In Coach Duffies’ last 6 years, he had five 19 win seasons and one 20 win season.  Duffie also led the Lady Catamounts Golf team to a 2015 AAAAA Region Championship and the AAAAA State finals where they were runner-up.  In 2016, the Lady Catamounts were Region 7-AAAAA Champions and went on to win the State Championship

Coach Duffie and everyone in the Dragon Nation looks forward to what the 2018-2019 season will hold as a new era begins.  It is proven by past experiences that Coach Duffie is capable of bringing the Dragons basketball program to the forefront and fill the gym with fans.