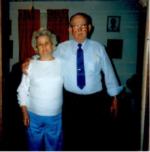 Nellie Mae Olvey, age 94, of Copperhill, TN passed away Thursday, January 27, 2011 in the Copper Basin Medical Center. Nellie was a lifelong resident of the Copper Basin area and was a member of the Tumbling Creek Baptist Church. She was preceded in death by her parents, Thomas I. and Anna Lou Cindy Nix Hicks, her grandson, Randy Olvey, and her loving husband of sixty seven years, Fred “Red”OlveyShe is survived by daughters, Grace Nelson, Frances Mealer, Mildred Gaddis and Geneva Olvey, all of Copperhill, TN, Christine Nicholson of Cleveland, TN; eleven grandchildren; fourteen great-grandchildren; four great-great grandchildren.