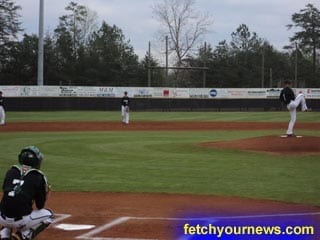 The Ridgeland Panthers baseball team traveled to Pickens County to play the Dragons, and used the final two innings to stage a 6-2 come from behind victory over the home team. The loss increased the Dragons’ losing streak to six games. Ridgeland pitcher Alex Ridge threw a complete game and picked up the win for the Panthers.Dragons’ head Coach Jason Nunn addressed the teams’ woes in an exclusive fetchyournews.com post-game interview.

“We play with anybody for six innings,” he said. “We got to learn to score early. We also have to put teams away.”

The game began as a defensive struggle with both teams finding the search for runs harder than finding Waldo. Pickens pitcher, Dylan Childers, began the game by forcing a ground out of lead off batter Darren Letzgus, before walking Isaac Martin. After a fly out to center field by Daniel Johnson, Ridge hit a single to right field; however, Childers ended the scoring threat by striking out Trevor Porter. The Dragons finished the inning with three straight ground outs. Dragon at the Plate
(Photo by LT Melton)

The second inning featured more 85’ Bears style defense from both teams as Hunter Dougherty’s line drive was caught at first base. Following two walks, Childers forced a fly out and caught a line drive to close out the top of the inning.

Matt Cook led off for the Dragons with a single to shallow center field. Dillon Trego followed with a ground out to first, as did Aaron Lohman. Jesse Drecker was robbed, Hamburgler style, of a line drive by the Ridgeland first baseman. It was a shining example of the plethora of “ESPN Web Gem” type plays that Nunn said has been indicative of his team’s lack of luck throughout the losing streak.

Martin began the third inning with a walk and subsequently stole second base. After Childers struck out the next batter, Ridge hit a sacrifice ground out to move Martin to third. Martin then proceeded to steal home on a gutsy move that minutely beat the tag of the catcher, Trego. Childers closed the Panthers out with a strike out. The Dragons again went down one, two, three, with two fly outs and strike out to close the inning down 1-0.

In the top of the fourth inning Childers was nothing less than a grand. The Dragon recorded three straight “K’s” to retire the Panthers in succession. The Dragons offense continued to come up shorter than Verne Troyer. Pickens was retired in succession, with a fly out to center, followed by two strike outs.

Westley Currie led off for the Panthers in the top of the fifth with a ground out to third base. Letzgus mirrored Currie’s at bat. Martin was walked, but subsequently thrown out trying to steal second base. The Dragons caught fire in the bottom of the fifth. After a pop fly to the catcher by Trego, Aaron Lohman hit a double to center field. He then stole third base. Jesse Drecker put the Dragons up with a two run home run with a crushing blow deep over the right field wall. However, the Dragons would score no more on the night. A fly out to left by Ryan Neill, and a strike out by Aaron Eubanks ended the inning. The top of the sixth, saw Johnson lead off with a ground out to the shortstop. The throw narrowly beat Johnson, and the Ridgeland crowd voiced its displeasure.

One fan yelled, “If you can’t beat me cheat me.”

Ridge followed Johnson’s ground out with a double to center field. Josh Turner was brought in as a courtesy runner for Johnson. Long followed with a walk. After a fly out to the short stop Tyler Forrest hit an RBI single that the tied the game 2-2. After a strike out by Mikey Chavez, Long, positioned on third base, took advantage of Trego literally dropping the ball from the catcher position, and stole home. This gave the Panthers a 3-2 lead that would not be relinquished.

Connor North led off for the Dragons in the bottom of the sixth with a single deep to right field. Dylan Childers moved North to second with a sacrifice bunt. A Balk by Ridge moved North to third, but he was left stranded following to strike outs that closed the inning. Dragons Head to Dugout Between Innings
(Photo by LT Melton)

Things truly fell a part, like “The Roots” first album, for the Dragons in the seventh with the visiting team piling on the runs buffet style. Ridgeland scored three more runs giving the Panthers the final score lead of 6-2. Trego was the only Dragon to reach base in the bottom of the seventh, with a double to deep center field; however, he was left stranded as Ridge struck out the next three Dragons to end the game.

Nunn noted that “it’s hard being positive and upbeat” during a losing streak but hopes to turn things around in the Dragons’ next game, at home against Cartersville High School.