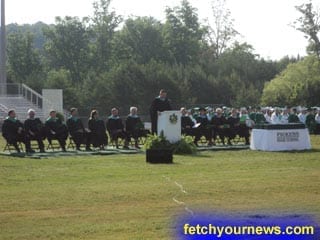 The Pickens High School class of 2011 graduated. Coach Kyle Rasco, who serves as athletic trainer for the Dragons’ athletic teams and health teacher at the school, gave the commencement address.The graduate processional was accompanied by the classic “Pomp and Circumstance.” Senior class treasurer, Jessica Bell, led the reflective moment of silence, followed by Haley Murphy’s rendition of the national anthem. Rasco, a PHS graduate, instructed the graduates to “soak in the moment” as well as “hold tight to your past.” Rasco touched on the theme of “The Best Days” and let the seniors know that their “best days are yet to come.”

“The Best Days,” the theme of the graduation, was expounded on by Kayla Barnad, senior class secretary. Jason Aldean’s “Laughed Until We Cried,” the class song, was played immediately afterward. After all diplomas were awarded, the crowd was treated to a rousing rendition of the Alma Mater performed by graduates, Dedra Banks, Tyler Weaver and Natalie Young. Prinicipal Williams presented the crowd with the graduating class of 2011 with the classic raining of caps instantaneously following.