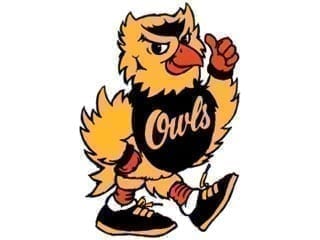 The Kennesaw State Owls dropped a pair of road games on Tuesday afternoon, falling to the Georgia Southern Eagles, 4-2 and 7-2.
The Owls (20-16, 4-4 Atlantic Sun Conference), were on top for most of the first game, taking advantage of some defensive miscues by Georgia Southern (21-21, 9-3 Southern Conference) in the top half of the second inning to get on the board. Jessica Cross and Lyndsay McCurry each had singles, and Stephanie Phillips would reach first base after striking out thanks to a wild pitch and errant throw to first base. With the bases loaded and two outs, Jensen Hackett hit what seemed to be a routine ground ball to the shortstop, but the throw to first was low and skipped past the first baseman to the fence, scoring Cross and Phillips to give the Black and Gold a 2-0 advantage.

Owls pitcher Amanda Henderson would run into a jam in the bottom of the sixth inning, however, with the Owls ahead, 2-1. The freshman allowed back-to-back-back singles with one out to load the bases. The next batter, centerfielder Marie Fogle, would make it four straight singles, hitting a soft floater over third base that would score a pair to give the Eagles the lead, 3-2. During the next at-bat, Hackett was unable to hold on to a high pop up between second and third base, which allowed an insurance run to score for the Eagles.

The Owls struggled offensively in the second game, falling behind 6-0 before a Sharon Swanson home run made it 6-2 in the top of the sixth inning. The home run was the 10th of the year season for Swanson, which puts her in second place in the A-Sun.

Henderson had a solid performance in the opener, tossing all six innings and allowing just four runs, three earned, on eight hits, while striking out 11 batters, a career high.

Kennesaw State is back in action again on Wednesday evening, when they visit Mewborn Field on the campus of Georgia Tech to take on the Yellow Jackets. First pitch is scheduled for 6 p.m. The Black and Gold defeated Georgia Tech the first time the two teams met this season, 4-1, at Bailey Park on Feb. 23.