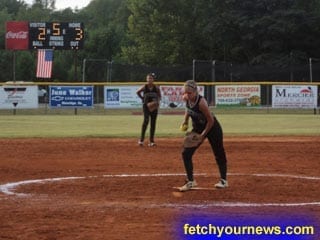 The Pickens High School varsity softball team fell 5-2 to the Fannin County High School Lady Rebels in the home opener for the Lady Rebels. The game began as a pitchers’ duel between the “Nettes’” Savannah Buck and Fannin’s Sadie Golden; however, Fannin pulled away in the bottom of the fourth scoring two runs to take the lead for good.The Dragonettes offense was bottled up in the first inning as, lead off batter, Megan Dixon grounded out to the short stop. Danielle Goss followed suite with a repeat of Dixon’s at bat. Kristen Garner popped out to the short stop as well, giving, Lady Rebel, Missy Dixon three straight recorded outs.

Buck “got buck” on the mound, retiring the Lady Rebels in three straight at bats, by recording two straight strike outs, then forcing Candace German into a ground out. Buck began the second inning off when she reached first via a walk. MaryJo Childers was brought in as courtesy runner, and stole second. Kennedy McTaggert followed, but failed to reach first. The Dragonettes’ scoring threat came to a close when Childers was thrown out at third and Ellie Fields ground out to the pitcher.

Neither team was able to score in the second and third innings as both pitchers battled and retired batters left and righties.

The fourth inning was a virtual smorgasbord of runs, compared to the earlier innings, as Dixon led the inning with a triple, and scored when, next batter, Danielle Goss drove her in with a sacrifice fly to give the Dragonettes a 1-0 lead. Kristen Garner walked, and following a fly out to center field by Buck, Kennedy McTaggert’s double to left field put women on second and third. The “Nettes” hot streak cooled when Fields struck out.

The bottom of the fourth saw Alexis Collis lead off with a line drive single right past second base. She moved into scoring position when she was able to steal both second and third off errant pitches. Karly Thompson drove her in with an RBI triple that tied the game at one a piece. Natalie McLaughin’s RBI single scored Thompson and the Lady Rebels took the lead. Mallory Deal’s sacrifice bunt moved McLaughin to second and Kelley Watkins’ RBI single made the score 3-1 in Fannin’s favor. The Nettes’ defense was able hold tight when courtesy runner, Josie Millsaps, was thrown out at a second in a failed Fannin steal attempt and Golden failed to reach first. The Nettes caught a fire themselves in the top of the fifth. Salone Brown led off with a single to center field. Elisha Roland’s sacrifice bunt moved Brown to second. Following a fly out, Dixon’s single to right field put women on first and second. Brown was able to Hambergurlar home, cutting the lead to one (3-2). Dixon stole second on the failed Fannin play at home on Brown. The Nettes’ scoring threat came to an end when Goss grounded out to the short stop.

The Lady Rebels secured the lead for good with a two out rally in the bottom of the fifth. Candace German was the first Fannin player to reach base in the inning when she hit a blooper single to left field. Collis’ RBI line drive double to center field made the score (4-2). Karly Thompson followed with an RBI single that scored Collis, giving the game its final score (5-2).

Garner led off the sixth inning with a line drive double to right field. A walk by Buck, put women on first and second. Following a short fly out, Fields hit a single. Buck was thrown out via a force at second. Because the Fannin secondbasewoman fell down on the play, the Pickens’ fan base vehemently disagreed, as did head coach, Jason Nunn. Despite Nunn’s disagreement, and consequent appeal to the home plate umpire, the call stood. Next batter, Salone Brown, flew out, effectively ending the scoring Nettes’ scoring threat in the inning.

Buck was able to keep the Lady Rebels scoreless the rest of the game, but the Nettes’ bats couldn’t produce enough offense to mount an effective comeback.