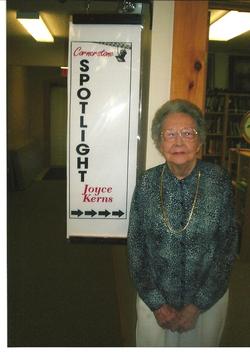 Born November 3, 1925 in Bradenton, Florida, she was the daughter of the late Ernest Marian Spivey and Lula Lee Callaway Spivey. She was also preceded in death by her Husband, Rufus Egbert Kerns and a Son, William Thomas Kerns. Mrs. Kerns was a homemaker and was the oldest member of the Cornerstone Baptist Church in Cherry Log, Georgia.

At her request, Mrs. Kerns was cremated and a Memorial Service is scheduled for 11:00 a.m., Saturday, February 4, 2012, at the Cornerstone Baptist Church in Cherry Log, Georgia, Dr. Paul Mims will officiate.

In lieu of flowers, the family request that donations be made In Memory of Mrs. Joyce S. Kerns, to the Cornerstone Baptist Church Building Fund, P.O. 400, Cherry Log, Georgia 30522.

Arrangements and Services are entrusted to Roper Funeral Home and Crematory of Jasper, Georgia.