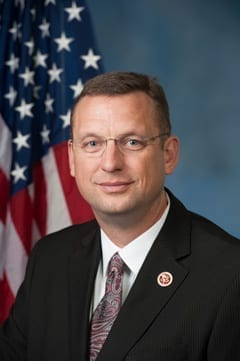 Congressman Doug Collins (GA-09) recently discussed his legislation that accelerates and streamlines the process by which Congress cuts duplicative and wasteful federal programs on C-SPAN’s Washington Journal.
In a segment Tuesday, Congressman Collins outlined his vision for the Commission on the Accountability and Review of Federal Agencies (CARFA) as outlined in H.R. 4566.

Describing CARFA, Congressman Collins said that first and foremost it “takes away our excuses” for getting rid of programs that are duplicative, outdated, or inefficient. Collins detailed examples of programs that could be cut and the reasons why this often doesn’t happen in the segment which can be viewed below.

Collins’ appearance came amid growing grassroots support for CARFA. David Williams of the Taxpayers Protection Alliance and Pete Sepp of the National Taxpayers Union have called CARFA a “much-needed step in the right direction.” John Connelly, President of the National Fisheries Institute, said “the passage of the CARFA Act and the active oversight of the proposed committee would be invaluable in curbing and eliminating the fiscal damage that these types of wasteful programs can wreak.”