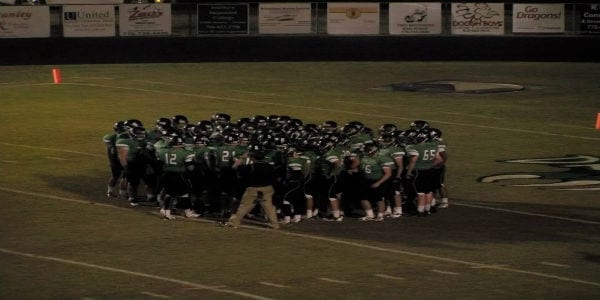 Last Friday, the Dragons hosted the Panthers of Ridgeland High School in what was the region opener for both teams. Prior to kickoff, Mr and Miss PHS for 2014-15 were crowned as Andrew Haygood and Emma Shipley-Schmitt would reign supreme. Coming into the ball game, the Dragons was reigning over opponents, scoring 43 ppg and giving up only an impressive 16.7 ppg during their 3-game winning streak. Pickens looked to continue that trend as the Dragons welcomed a Panther squad that is primarily run oriented. The Panthers pulled out the victory, 35-28.

The Dragons won the toss but differed to the second half and Ridgeland had the ball first starting at the Ridgeland 28-yd line. The Panthers used 7:57 of the clock, and two timeouts, before punching it in from five yards out, giving Ridgeland a 7-0 lead with 4:43 left in the opening quarter.

The Dragons first possession of the game would start on the Pickens 26 yard line. Facing a fourth down, the Dragons rolled the dice and went for it and Shannon Brooks scampered for a 52 yard gain, and Marcus Byrd finished it off with a 10 yard touch down run with 2:50 left in the 1st quarter deadlocking the game at seven heading to the second quarter.

The Panthers regained the lead, 14-7, with 7:35 left in the first half. Back to back three and outs by both teams stalled the scoring until an 86-yd bomb from Byrd to Zack Herman tied things up at 14 with 2:39 left in the half. The first half ended the same way we began it, tied.

Ridgeland started the sedond half with a surprise pooch kick and recover the ball at the Dragon 31, eventually scoring on a six yard run, taking the lead again, 20-14, after a missed PAT with 9:01 left in the third.

That was all the scoring in the quarter as neither team could get anything going offensively after the first Panther score. The Panthers added another score with 6:48 left in game to stretch the lead to 28-14, the Dragons biggest deficit of the season; however, Shannon Brooks’ two yard touchdown run, cut the Panther lead in half, 28-21, with 4:23 left in the game.

A long run from Ridgeland set up an eight yard touchdown run with 3:24 left making the score 35-21 in Ridgeland’s favor. Shannon Brooks ran it in for a second time cutting the lead to seven, 35-28, with 1:13 left but that’s how this one ended. Dragons are now 3-1 on the season and 0-1 in region play.

The Dragons look to get back on the winning track Friday night on October 3rd as Pickens hosts the Northwest Whitfield Bruins at Dragon Stadium. On the season the Dragons are averaging 39.3 ppg on offense and giving up 21.3 while the Bruins average 28.5 ppg and give up 18.3. Both teams are 3-1 on the season, Dragons are 0-1 and the Bruins are 1-0 in region play. This will be the third meeting between the two teams with Northwest Whitfield winning both in in 2012 and 2013.