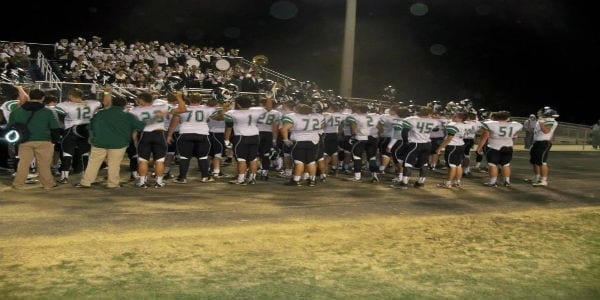 A big week for Pickens High School football started when the JV Dragons defeated Lumpkin County last Thursday 41-34 to finish the season at 6-1 and capture the league championship. Friday night, the varsity Dragons traveled to Catoosa County to take on the Generals of Heritage in what was a crucial game for both teams’ playoff hopes. The Dragons came in with a 3-1 region record, while the Generals had a 2-2 region record. It had been 3,275 days since the Dragons last appearance in the state playoffs, that number would fall to 0.

Heritage started off the ball game with possession and the Dragon defense forced a three and out. Zack Herman set up the offense with great field position after a fantastic punt return. The Dragons had to settle for a 27-yd field goal from Ty Chastain giving Pickens a 3-0 lead with 7:25 left in the first quarter.

Both defenses held the offenses for the respective teams for the majority of the opening quarter until the state’s leading rusher, Shannon Brooks, found the end zone after a 10-yd run to the right side giving the Dragons a 10-0 lead heading into the second quarter.

The defense for each team took control of the second quarter as there was no scoring by either team, ending the half 10-0 Dragons with Pickens getting the ball to start the 2nd half. The third quarter, mirrored the second, in that it belonged to the defenses for the most part until Shannon Brooks rumbled and barreled his way from 89 yards out to stretch the lead out 17-0, going into the fourth quarter.

Pickens was 12 minutes away from the Dragons ending the long playoff drought. Marcus Byrd capped off a drive with a 43-yd run to make it a final of 23-0 sending the Dragons to the playoffs for the first time in nine years.

Defensively, the Dragons players were all over the field making play after play getting one takeaway, and shut outing the Heritage offense on the night.

I don’t think next week has to be hyped but i’ll do it anyway. The Dragons are back home next Friday to take on the rivals from up north on 515. Both the Dragons and Bobcats come into this ball game at 7-1 and more importantly, 4-1 in region play. Gilmer has won the last five meetings between the two schools with the Dragons last win coming in 2008.