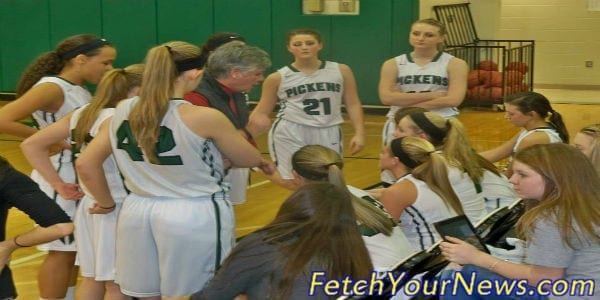 Last Tuesday, the Nettes varsity basketball team hosted the Lady Eagles of Collins Hill in the third and final day of the Pickens Holiday Classic. Pickens looked to end the Classic and 2014 with a big win as they get ready to get back to region play. Collins Hill proved to be a tough challenge for the Nettes.The first quarter started off fast as the Nettes came out and pressed the bigger Lady Eagles and found early success with this pressure defense. Collins Hill adjusted to the Pickens defense and ended the first quarter with the lead 9-4. The Lady Eagles outscored the Nettes in the second quarter, 16-9 to take a 25-13 lead into halftime.

Pickens struggled to find the basket in the third quarter as Collins Hill outscored them 17-6 to stretch their lead to 42-19 headed to the fourth and final quarter of play. The Nettes outscored the Lady Eagles in the fourth, 17-16, but it wouldn’t be enough as Collins Hill took this one, 58-36. Pickens is now 6-9 on the season and 2-3 in region play.

Leading the way for the Nettes last Tuesday were:

A busy week for the Nettes starts tomorrow as they travel to Dalton to take on the Lady Raiders of Southeast Whitfield in 7AAAA action. Tip off for that one scheduled for 6 pm. Pickens will then be back in the Dragons Den Friday for their first home game of the new year as they host the Ridgeland Lady Panthers in region play scheduled for 6 pm. The week concludes for the Nettes on Saturday when they travel up to Blue Ridge to take on the Lady Rebels of Fannin in non region action at 4 pm.