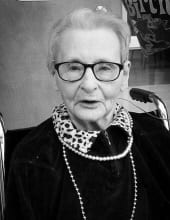 Rosanna immigrated to the United States in the 1930’s. She married Leonard Lucian of Waterbury, Connecticut on January 20, 1947.

The family requests privacy during their time of grieving and will conduct a closed, private viewing for immediate family members only on Saturday, January 21, 2017, at Roper Funeral Home in Jasper, GA. The family would like to extend their gratitude to everyone for their prayers and thoughts during this difficult time. In lieu of flowers, the family desires that a cherished memory of Rosanna is shared instead at roperfuneralhome.com.