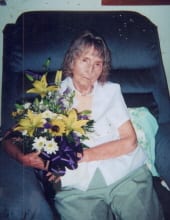 Azzie was from a bygone era and lived through world events we only read about in history books. She was born to Flora Padgett Wofford and Andy Wofford on May 13, 1913, just a year after the sinking of the Titanic. Woodrow Wilson was the U.S. President. That year the government first started collecting income tax after the passage of the 16th Amendment, and women were marching on Washington to demand the right to vote. Also born that year were former presidents Nixon and Ford.

But most of that was a world away to Azzie, a simple country girl from the Georgia Appalachians who valued close kin over anything else. Raised by parents who came of age shortly after the Civil War, she was a link to the old days and old ways. The last known survivor of her generation of the Wofford-Padgett lineage, Azzie was blessed with a long life, as was her mother who lived to 106. She came to know heartache early in life, as her father was beaten and left to die on a railroad track when she was a child. Throughout her life, she often expressed endless gratitude for her brother Bob, who became the provider and protected their big family from starvation after her father’s death.

Azzie lived her life with the mindset and ways of her 19th century heritage. She started dipping snuff at an early age and enjoyed it for most of her life. Like many of her generation she did not finish elementary school, but she was functional at reading and writing. Like many families of the time, Azzie did not have the modern conveniences that people have come to think of as life necessities. She raised her family without a washing machine, a refrigerator, or indoor plumbing. She used a wood-burning cook stove until 1965.

Azzie raised four children with her first husband Ralph Buchanan, having married and started her family during the Great Depression. Three years after Ralph passed away, she married Olen Fann, who was her companion for more than 40 years until his death. At the end of her life, Azzie received loving care in her daughter’s home.

One of the shortcomings of a long life is the sorrow of having to endure the passing of many loved ones, and Azzie experienced her share. She was preceded in death by three sisters: Minnie Cornwell, Victoria Mills Buchanan and Mae Blackwell; three brothers: Bob, Henry, and Walt Wofford; husbands, Ralph Buchanan and Olen Fann; three children: baby daughter, Betty Buchanan and sons, Jerry and Billy Buchanan; a son-in-law, Aaron “Red” Griffith; two daughters-in-law, Barbara Satterfield Buchanan and Berit Langeland Buchanan; and many nieces and nephews.

Arrangements are entrusted to the staff of Roper Funeral Home & Crematory in Jasper, GA.