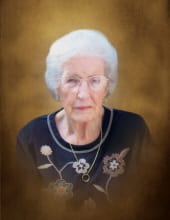 Amilie Collins, age 91, of Jasper, passed away Saturday, December 9, 2017 at her home. She was born November 24, 1926 to Paul and Cora Thacker in Nelson. Amilie was a Past Worthy Matron of the Jasper Eastern Star.

The Funeral Service will be 3:00 p.m., Thursday, December 14, 2017 in the Chapel of Roper Funeral Home with Reverend Alan Caylor officiating. Interment will follow in the Philadelphia Baptist Church Cemetery.

In lieu of flowers, the family requests that donations be made to Amilie Collins Memorial Fund in care of Roper Funeral Home; 206 Holly Street; Jasper, GA 30143.