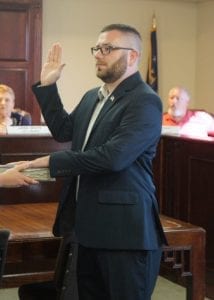 New council member Kirk Raffield takes his oath before sitting on the council for their June Meeting.

JASPER, Ga. – After May’s primary election night, Kirk Raffield pulled out a close victory of 272 votes to his opponents 262. With the 50.94 percent results, Raffield attended the city of Jasper’s June council meeting to be officially sworn in as a part of the council.

With it being his first meeting, Raffield swore his oath preceding the official call to order in their council meeting and officially took his seat after this. With many in attendance to watch the ceremony, one citizen, Regina Mosley Camp, took a moment to comment on the event saying she knew Raffield as a younger child. “I am truly excited for him because I know the quality of man he is,” said Camp.

Camp volunteered in Raffield’s campaign for the council, noting that she was fervent in her support because of what she has seen him do throughout her time with him.

The special election came after former council member Jim Looney stepped down to take the interim city manager position for Jasper. The seat has been empty up to this month.

With such a close race, Raffield moves forward on the council with a question on him constantly asking what he will bring to the council meetings and what he will accomplish for the city. Sitting in his first meeting, Raffield was not shy about his new seat, speaking fervently on an annexation issue specifically.  Check out more by reading City Council discusses Sharktop Ridge annexation.