After a loss in the season opener to Lumpkin Co., Pickens softball traveled to the home of the Panthers in Union Co. on Tuesday and earned the victory in the late innings.  With the Panthers striking for one in the bottom of the first it would have been easy for the Dragonettes to remember just one day before where their opponent had started the game in the same fashion.

As the game moved through the next few innings remaining at 1-0, it wasn’t until the top of the fifth that the PHS bats came alive.  Pickens put 4 runs on the board by way of 5 hits, 2 fielder’s choice and a hit batsman plating Zoe Morgan,Allie Tlacil, Sarah Morris and Chloe McPhersone.  Pickens fifth inning came to close leaving 2 runners on base after a fly out by Charley Hulsey.

These four runs and a great pitching performance by Sarah Morris proved to be enough to keep the win.  Morris was in the circle for all seven innings allowing 3 runs all earned on 8 hits 1 hit by pitch and 5 strikeouts.  119 pitches were thrown by Morris with 73 being strikes.  This win brings the Dragonettes back to 1-1 in the 2018 season with still a long season ahead.  Next up for Pickens will be August 16th at home as they welcome in Lafayette. 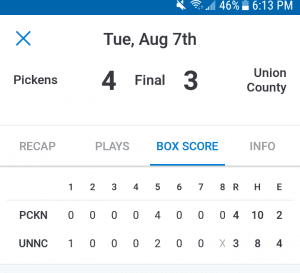