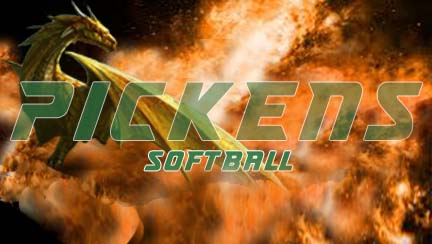 The Pickens High School Softball team traveled to Lumpkin Co on Monday looking to get a little revenge fro the opening day loss to the Indians.  With the weather cooler than normal on Monday it was a perfect day for a region game between two good teams.

Both teams started slow with 2 innings of scoreless ball and with Sarah Morris in the circle for Pickens, this is something the Indians would see for the rest of the game. The ladies of Lumpkin could on sit and stare at zeros on their side of the scoreboard as Morris pitched a gem of a game,  In her outstanding performance, Morris threw a mere 51 pitches giving up just 2 hits and walking 3 Indian Batters.  9 out of 15 opposing hitters saw first pitch strikes out of Morris’s hand in the 12-0 shut out win for Sarah Morris and the Dragonettes.

The third inning had the Indians defense seeing fire.  The Dragonettes opened the scoring gates and breathed fire upon the pitches from their circle opponent.  With almost every batter for Pickens having an outstanding day, I will say that this was a total team effort with everyone in the line contributing to the victory and the sought after revenge from the opening day defeat.  Hattie Baker was perfect at the plate going 2-2 with 1 RBI and 1 run scored and as was Ellie Abner with a 3-3 game and 2 RBI.

The Dragonettes will travel to Lafayette on Wednesday to face the Ramblers in region action.  Start time is scheduled for 5:00 PM.