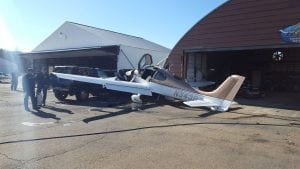 Public Information Officer Kris Stancil of the Pickens County Sheriff’s Office stated that the National Transportation Safety Board (NTSB), a government agency, would be conducting the interviews and investigations on why the crash occurred, but the Sheriff’s Office was called to assist with the incident.

Stancil said that at this time, it appears the plane may have lost control at some point in its landing process and “clipped another parked plane on the runway and then drove into, actually three different vehicles that it made contact with. One took the brunt of the front of the plane more than any of the others.” Stancil did note that the vehicles were unoccupied resulting in the two in the plane being the only injuries from the accident.

Stancil said the two people only received minor injuries and are being treated now for those injuries.

As for the three vehicles, the plane had veered off the runway and struck them near a garage. Stancil said that while one took the plane’s impact head on and another received significant damage including busting out the windows, the third vehicle only received scrapes and minor damage. Authorities were able to move the third vehicle from the scene.

Though Stancil said that no major fires erupted after the accident, he did note that fuel had been spilled onto the pavement. One plane was reported to have been delayed for take-off at the time of the accident.

At this time, NTSB is taking over the investigation of this unusual incident.