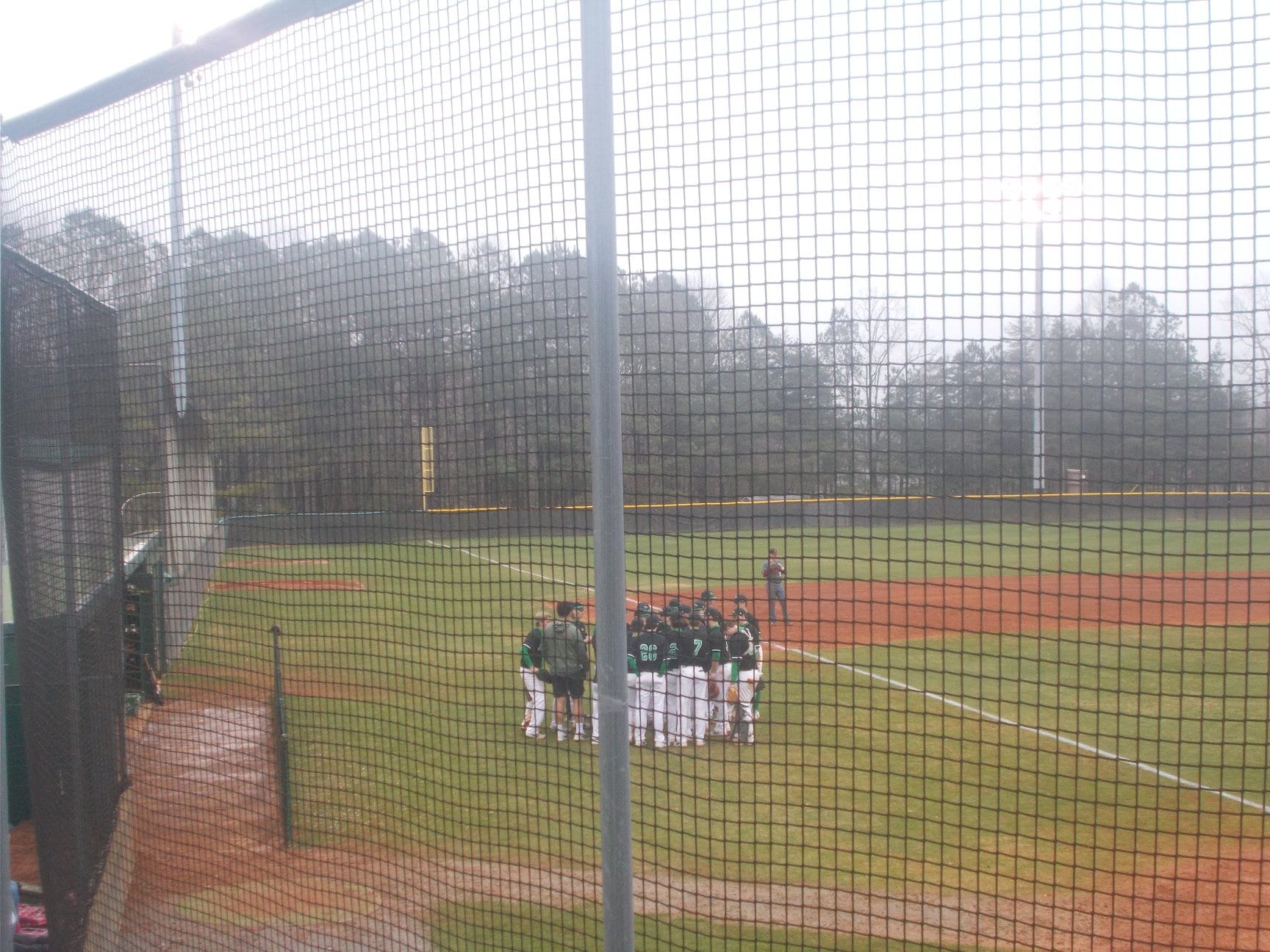 It was a cold, cloudy, sometimes foggy day at the ball park yesterday as the PHS Dragons varsity baseball team welcomed three teams to Dragons Field for an all day baseballathon. There were four games played yesterday featuring Pickens, Lumpkin, Northgate, & McIntosh. The 1st game, saw the Pickens Dragons take on the Northgate Vikings out of the 6A classification at 11 am.

Junior Colby James got the call to start for the Dragons in the 1st game & his stuff was electric on this cold day. James, needed just 12 pitches to get out of the top of the 1st. The Vikings got the Dragons to go down in order, & we headed to the 2nd, still 0-0. Northgate had a mini threat in the top of the 2nd, but James was able to keep it scoreless. After a hit batter & a couple of walks, Chad Pacas came into score to give Pickens a 1-0 lead going to the 3rd.

James needed 13 pitches in the top of the 3rd, & collected his first strikeout in the process. The Dragons scored 2 runs in the bottom of the frame after a leadoff double from Brady Moore, a single from Caswell Smith, came home to score, giving Pickens a 3-0 lead going to the 4th. The Vikings cut into the lead in the top of the 4th as they got a run in on two hits. The Dragons still held the lead, 3-1. In the bottom of the inning, Pickens broke it open after scoring 4 runs, & getting RBI from Jacob Kirchoff, Tyler Vreeland, & James himself. Going to the 5th, the Dragons led Northgate 7-1.

James was able to shut down the Vikings the rest of the way, pitching a complete game as Pickens took the win in thier first game, 7-1.

In their 2nd game of the day, Pickens took on the McIntosh Chiefs out of the 5A classification. Prior to this game, McIntosh fell to Lumpkin 10-8. Pickens, was looking to go 2-0 on the day, & get a 2nd straight win over a higher classification.

Chad Pacas got the start for the Dragons & despite getting into early trouble, pitched well in his first start of the 2019 season. McIntosh plated two runs in the top of the 1st, & while the Dragons drew a walk in the bottom of the frame, they couldn’t bring them around & the Chiefs took a 2-0 lead to the 2nd. Pacas settled down in the top of the 2nd collecting his 2nd & 3rd strikeouts of the game. Pickens went in order in the bottom of the 2nd, & McIntosh took it’s 2-0 lead into the 3rd.

The Dragons got a 2 out walk in the bottom of the 3rd, looking to cut into the McIntosh lead. The runner would be stranded at 3rd however & we’d go to the 4th, Chiefs still ahead, 2-0. In the top of the 4th, McIntosh plated 9 runs to extend their lead to 11-0. The Chiefs scored twice more in the top of the 5th to make it 13-0. Pickens scored twice themselves in the bottom of the 5th, but it would be McIntosh to come away with the win, 13-2.

Pickens, will be on the road on Monday as they’ll take on the Denmark Danes on Monday in a make up game that was scheduled for last Friday. The game will be played at LakePoint, & the first pitch is scheduled for 2:30.