JASPER, Ga.- The Pickens County Board of Education met on Thursday, March 14, 2019, for their regular board meeting. During the first half of the meeting, several individuals were presented with awards on behalf of Pickens Middle School and Pickens High School. 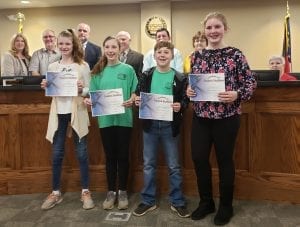 The first was an award for the Science Fair. On Saturday, February 2,  2019, four Jasper Middle School students, all in the sixth grade, competed in the Regional Georgia Science and Engineering Fair (GSEF) against sixth to 12th graders. These students, pictured left to right, are Ellie Hollis for placing third in Plant Science, Eva Stanley for placing third in Chemical Energy, Grayson Ludington for placing second in Behavioral and Social Sciences, and Addison Lewis for placing fourth in Earth and Environmental Science. 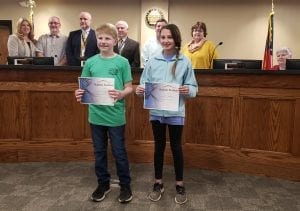 The second award was for the Social Studies Fair. On Saturday, January 12, 2019, two Jasper Middle School students, both in the fifth grade, competed at the North West Georgia Regional Social Studies Fair in Kennesaw, Georgia. These students, pictured left to right, are Micah Newton for his project on the Dangers of Vaping and Ellison Steinhauer for her project on the Vietnam War Draft. 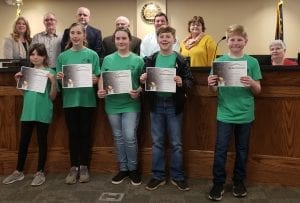 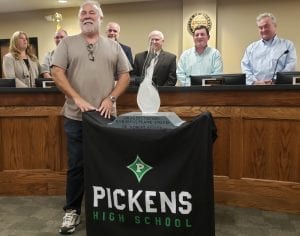 The final award of the night, the “Dragon Nation Enduring Flame Award” was presented to Dr. Robert Keller for his outstanding contributions to Pickens High School.

Congratulations from Fetch Your News to all who received recognition during this Board of Education meeting!