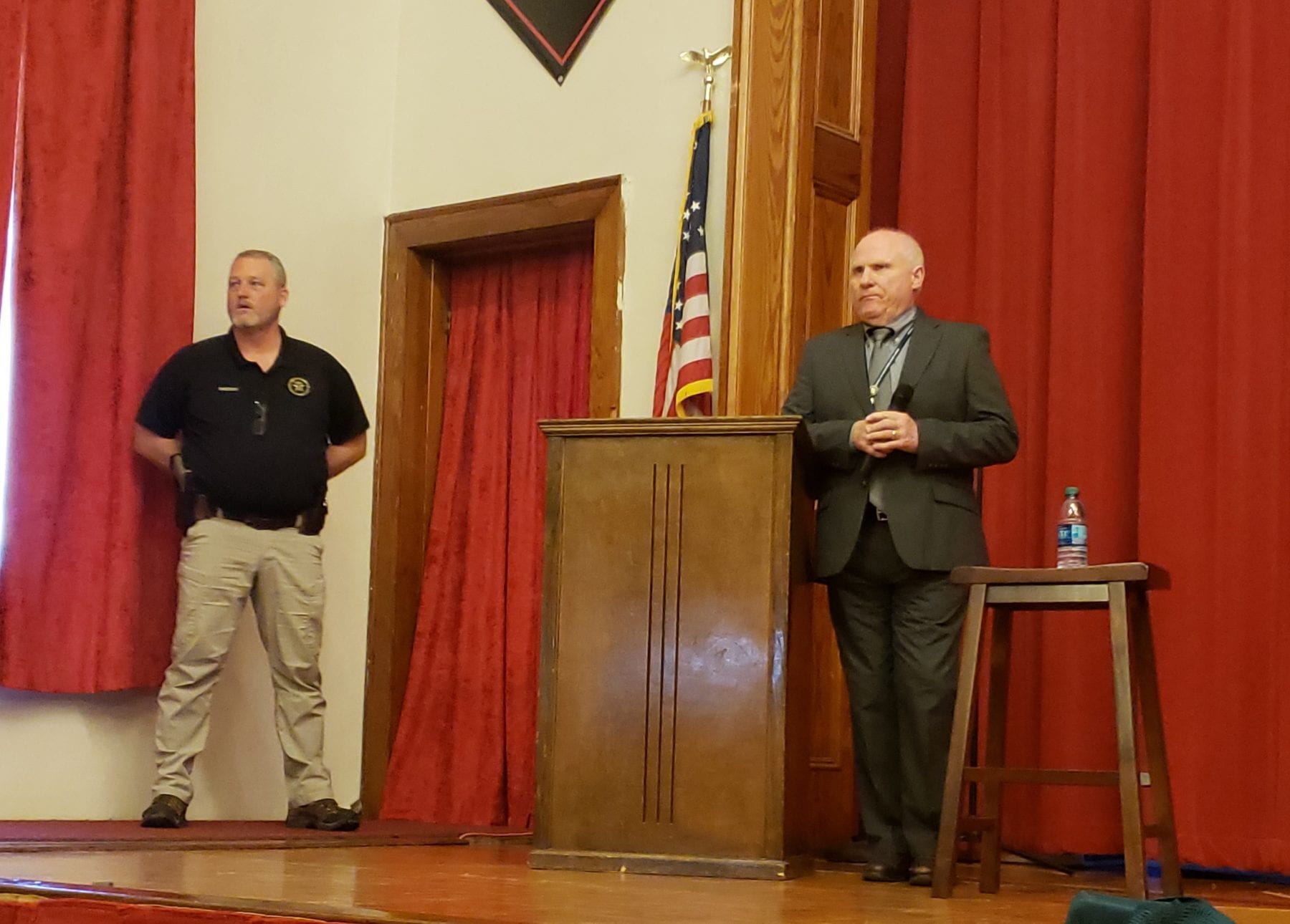 JASPER, Ga.- Following the incident last Friday in which a man on the sex offender registry gained access to Tate Elementary, Superintendent Dr. Carlson Wilson and Sheriff Donnie Craig held a meeting at the Tate Elementary auditorium on Thursday, March 28, 2019, to discuss safety and security in the school system.

Craig states (2:55) that the status of the offender was not known until he had already left the school grounds, but that the arrest was made quickly. He goes on to explain exactly how the events unfolded the day of the incident (4:50). Around 9:13 am, the school resource officer on campus at the time had overheard an employee of the school asking a Bruce Lee Daniel how he had obtained access. Daniel responded that he was looking for janitorial work, and had gained access through a door next to the cafeteria. Daniel was then taken to the office, where the resource officer on-site had him sign in and have a copy of his driver’s license made.

Again, Daniel claimed he was at the school in search of janitorial work, and was informed that he must go through a contractor to obtain such employment. Daniel was then escorted out of the building (6:18), but first showed school staff where he had entered. The doors by the cafeteria were secured at this point in time, but the resource officer then ran his license, at which time he was found to be on the sex offender registry. The assistant principal, as well as the sergeant in charge of the school resource officers within the county were notified (7:26), following a walk-through of the school grounds. The sergeant then passed word along to the other school resource officers, the school administrators, the uniform patrol division, and the county’s criminal investigators, at which time a “be on the look out” was posted for Daniel. 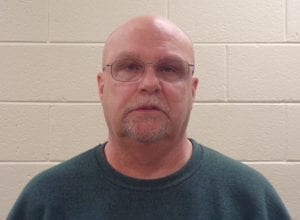 An investigation was immediately launched, with detectives responding to the school (8:27). It was found that Daniel was on probation out of Cherokee County for the offense of being a Peeping Tom (or something similar, states Craig). A warrant was obtained from Cherokee County for probation violation, following warrants for the arrest of Daniel.

Upon checking security camera footage, at approximately 9:06 am, Daniel found the front doors to be locked (10:00). He then found one of the doors near the cafeteria ajar. He then walked towards the other end of the school, towards the gymnasium, before entering the girls bathroom. He wasn’t there for long before walking to the boys bathroom and standing with his back to the wall. Craig states that they’re aware of this because you could see his shoes from the camera in the hall (11:01). At approximately 9:10 am, several boys entered the restroom, and at approximately 9:11 am, Daniel left to return to the office area, at which time he was confronted by school staff. It was found that the door by the cafeteria in which Daniel entered was ajar due to a piece of bark that had been kicked towards the door earlier in the day when students had arrived (13:20).

Daniel was arrested around 3 pm on Friday, March 22, 2019 at his home and taken into custody at the Dawson County Sheriff’s Office, at which time he admitted he wasn’t at the school searching for a job, though Craig states that details can’t be given at this time as to what Daniel’s excuse was. According to Craig, Daniel faces 30-40 years for his charges.

Sheriff Craig states that, because of the investigation, information shared with the parents and the general public was initially limited (20:01). He cites that this was because if too much information was shared, it could potentially have caused problems with their investigation in such that it may have let Daniel know of the investigation underway against him. There have been several open records requests for the security camera footage, but Craig states that, because of the severity of the case, this footage won’t be released at this time.

Dr. Carlson Wilson states shortly after the opening of the meeting (1:39) that one of the first things to change is the addition of a resource officer so that one will be present within all of the schools located within Pickens County. Wilson goes on to state that money has been spent on new security cameras and updates to that system (25:05), as well as classroom cameras and emergency notification systems. New digital radio communications systems are now within the schools and the buses that tie directly to 911, and there is now GPS tracking on each of the buses for law enforcement utilization. There were 55 new handheld radios within the schools, and new fencing has been completed on several of the campuses, with more fencing on the way. New safety vestibules are to be installed, making access to the schools impossible without going through the front office first.

Dr. Wilson goes on to say that a “welcome center” has been implemented at the Pickens High School (26:04), which thus far has turned away 17 vehicles approaching the school (though for unknown reasons). Card readers are also being implemented on the campus, making it easier to lock down doors and tell who used which doors when. Several classes, such as the weight training class, have been brought inside of the main building instead of utilizing outside buildings, though the agriculture class still utilizes the green house located outside. Baseball and Cross-Country sports have also been moved to the high school, though the swimming team, golf team, and bass fishing team will still have to leave campus for their activities.

Dr. Wilson states that involvement on active shooter and intruder training has been constant with all employees (28:44), that background checks on volunteers will continue to be a thing, and that door monitoring and emergency lock down software is currently being looked into. The ability to run a license check on all visitors is also a likely possibility in the near future, according to Dr. Wilson, but he goes on to say that staff members as well as parents must work together to ensure every visitor within the schools comes prepared with a valid license, and displays a visitors badge at all times.

Members of the community ask questions during the safety and security meeting at Tate Elementary.

One of the parents present during the meeting proposed utilizing door alarms similar to those found in stores such as Walmart (32:10), with an opposing voice stating that this would trigger far too many alarms daily. Dr. Wilson’s comment towards this was that door monitoring software that includes an alarm is currently being looked into. Another parent posed the question as to why the school didn’t go into lock down during the incident, with Dr. Wilson stating that all of the schools within Pickens County are in a constant “soft lock down”, in which all exterior doors are supposed to be locked at all times. There was no complete lock down because none it was not determined that Daniel was a threat until he had left the campus.

Another question posed at the meeting was “who was watching the cameras during this?” Dr. Wilson responds that there’s not a single person who watches the cameras constantly, nor a person who constantly monitors halls (42:53). Dr. Wilson goes on to say that he is open to parental volunteers to monitor (after a background check) the halls or the cameras, and that most students and teachers were in class rooms during all of this, allowing Daniel an easy passage.

Yet another point made during the meeting was that, despite Dr. Carlson stating that there is someone present to monitor the children coming into the school each day, these monitors are “unarmed, defenseless staff” (48:25). Dr. Wilson responded that having an armed staff member to monitor the children is a possibility in the very near future.

Dr. Wilson states that the parents of the students who were in the bathroom were notified of the incident. Kayla Worley, parent of a student who was in the boys bathroom at the time of the incident, states her son told her “there was a man in the bathroom that had touched his shoulder and offered to give him some Beyblade toys to come over and talk to him”. She states that the school principal notified her of her son being present in the bathroom only after 7 pm that night, despite the press release from 3:40 pm earlier that day stating that there was no physical contact by offender Bruce Lee Daniel. “I was told that the man went into the bathroom and that I was welcome to watch the video, and that they were sorry that it had happened.” Worley states that she was never informed that her son was touched, though her son did tell his story to the sheriff who interviewed him. At (39:20), Dr. Wilson admits that the four parents of the children in the restroom at the time of the incident should have been notified earlier, and he apologies for letting this occur.

FetchYourNews.com attracts more than 300,000 page views and 3.5 million impressions per month for ad server. FYNTV attracts approximately 15,000 viewers per week and has between 15,000 to 60,000 per week Facebook page reach. For the most effective, least expensive local advertising, call 706-276-6397 or visit [email protected]