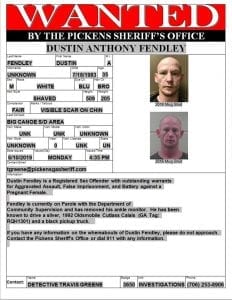 Courtesy of the Picken’s County Sheriff’s Office. Click to enlarge.

JASPER, Ga. – The Picken’s County Sheriff’s Office is still seeking the whereabouts of Dustin Anthony Fendley for outstanding warrants as of Wednesday, June 19, 2019.

Fendley is wanted for aggravated assault, battery against a pregnant female and false imprisonment.

This information was posted to the Picken’s County Sheriff’s Office Facebook page on Monday, June 10, 2019 at 5:07 pm, but according to Captain Kris Stancil, Fendley still hasn’t been located.

He was last seen on Saturday, June 8, 2019 in the area of Wilderness Parkway in the Big Canoe Subdivision / Community, though it is believed he has since fled the area.

He has been known to drive a silver 1992 Oldsmobile Cutlass Calais with the Georgia tag RQH1301, as well as a black pickup truck. The Sheriff’s Office describes him as a 35 year old caucasian male with blue eyes and brown shaved hair, five feet nine inches tall, 205 pounds, fair complexion with a visible scar on his chin.

Fendley is a registered sex offender and is currently on parole with the Department of Community Supervision, though he has removed his ankle monitor.

If you have any information regarding the whereabouts of Fendley please contact the Pickens County Sheriff’s Office or 911.