JASPER, Ga. – This week will see three meetings of the Jasper City Council with items directly focused on the Millage Rate that they have advertised at 6.78 mills.

Two of the meetings directly focus on the 2.125 mills increase as the city will meet twice on Monday, October 5, 2020, back-to-back, for a Public Hearing at 5:30 p.m. solely for discussion of the rate, and the city’s Regular Meeting at 6:00 p.m. Each of these meeting are being put on Zoom, found in the linked agendas, in efforts to allow more to attend, comment, and participate despite the virus. 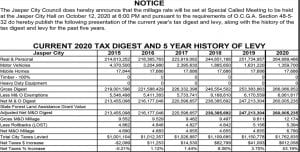 Then, another meeting is advertised for October 12, 2020, at 6:00 p.m. for a Special Called Meeting for the Millage Rate. However, the city does not have an agenda attached for this meeting yet.

City Manager Brandon Douglas did comment in a previous meeting that they could find places in a cursory look at a preliminary budget to allow them to lower this rate, but no new information on any changes has been made to FYN at this time. The set rate is required by law to have several meetings and opportunities for the public to speak on the issue.

With this week providing those opportunities, and one meeting already having occurred in September, the city could possibly adopt the rate at next week’s October 12 meeting in time for budgeting process over the coming months in preparation for 2021. That budget adoption is expected in early December.

Douglas called for corrective action in that September meeting after noting an expected deficit for next year totaling over $550,000.

With only two months to discuss and adjust that budget before December, this week’s meetings will set the tone for the entirety of 2021 as the millage rate heavily influences the budget revenues. The city has also published the Five-Year-History of the tax levy to their website showing the increases in property values relative to decreases in others like motor vehicles.

The city did allow and ask for comments from citizens in person as well as those attending by zoom in the previous meeting indicating that those attending digitally this week should also expect a chance to comment and ask questions on this issue as well.