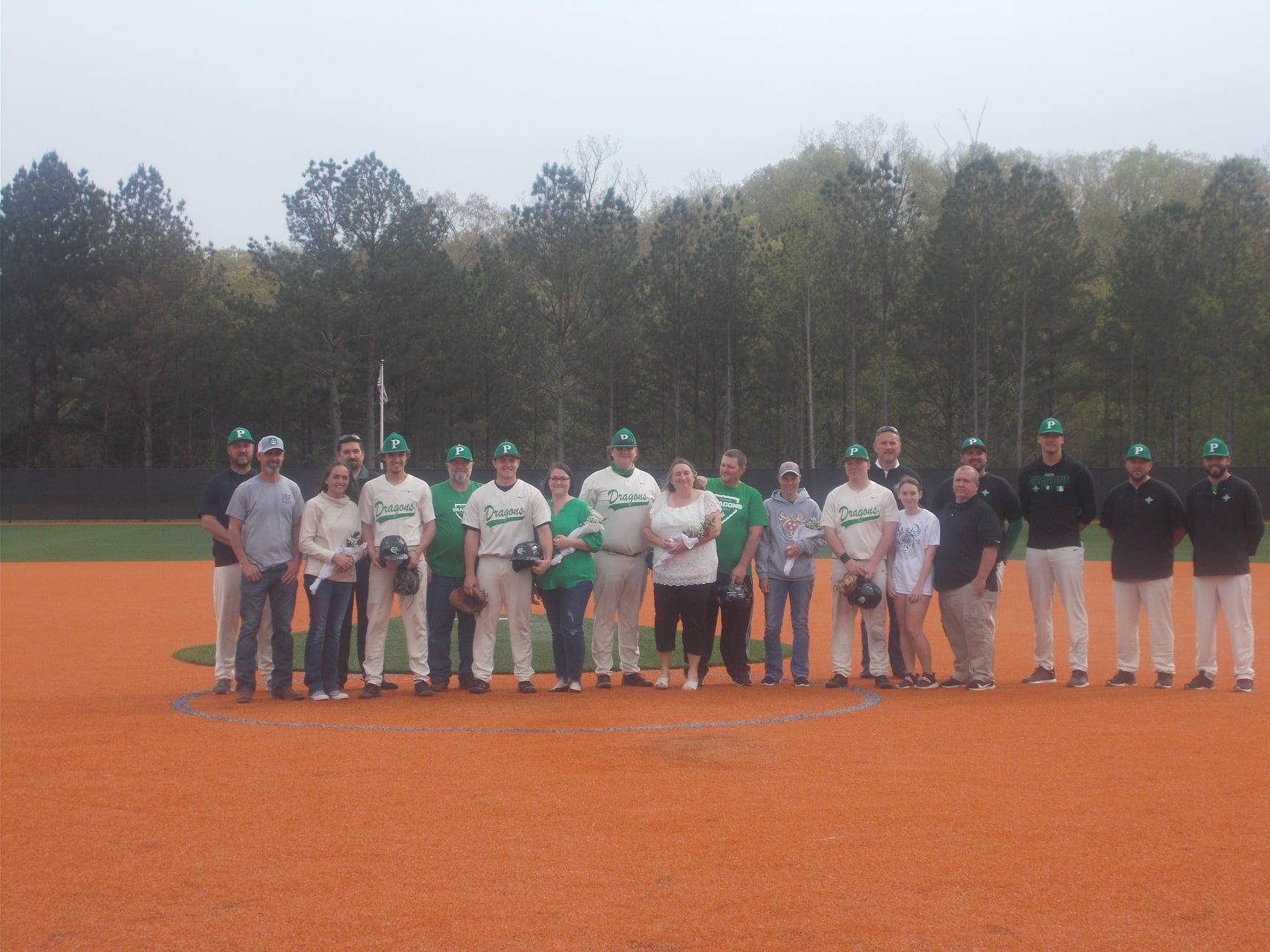 Pickens County, Ga — It was a night for celebration and to recognize as the Pickens Dragons (13-12, 5-10) welcomed the Fannin Rebels (6-19, 3-12) to Dunn Field on Friday, April, 16th for the second game of their home and home series. Before the game, Seniors Seth Densmore, Drake Sutton, Hunter White, and Jarod Whitmore were honored for their contributions to Dragons baseball over the years. The moms of the players then threw out a ceremonial first pitch to their sons. As for the game, the Dragons were able to pick up the sweep over the Rebels with a 9-0 win.

In the top of the 1st, Brady Martin was hit with a pitch and advanced to 2nd after a successful steal attempt. Sutton, the starter for the Dragons, collected his first strikeout of the game and induced a fly out to send it to the bottom of the 1st. In the bottom of the 1st, Trace Ledbetter reached 1st base after being hit by a pitch. Densmore, then followed with a 2-out double. Rebel starter, Wyatt Rogers, got a fly out for the 3rd out to send us to the 2nd, tied at 0.

In the top half of the 2nd, Rebels designated hitter Jake Kuna, reached on an error. Kuna, would be left stranded at 2nd as Sutton picked up his 3rd strikeout of the game to send us to the bottom of the 2nd. Pickens, broke through in the bottom half of the 2nd. Sutton got things going with a 1-out double. Harlan Will then reached 1st on a fielder’s choice. Colby Brooks, who courtesy ran for Sutton, scored on a passed ball to make it 1-0 Dragons. James Tilley, then reached on an error. Connor Shouse, cleared the bases as he belted a 3-run home run, the first of the season for the freshman, to make it 4-0. After a strikeout, Ledbetter hit a single, then scored on an RBI double from Densmore to make it 5-0 Dragons going to the top of the 3rd.

In the top of the 3rd, Martin drew a 2-out walk. Martin, would be left at 2nd after Sutton collected his 5th strikeout of the game. In the bottom of the frame, Sutton and Will were hit by pitches on back to back at bats with 1-out. Shouse, drove in courtesy runners Brooks and Ethan Gemberling with a 2-RBI double to make it 7-0. White, followed that up with an RBI single to bring in Shouse. Going to the 4th, the Dragons led the Rebels, 8-0.

The top of the 4th saw Fannin threaten with another scoring chance to try to cut the Pickens lead down. Logan Hughes and Sawyer Moreland reached with back to back singles with 1-out. After a ground out advanced the runners to 2nd and 3rd, Sutton forced a grounder to 1st to end the top half of the 4th. In the bottom of the 4th, Densmore led off by drawing a walk. Logan Shirley came in to pitch run for Densmore. After advancing to 2nd after Anthony Antinozzi was hit by a pitch, and to 3rd after a steal attempt, Shirley came in to score after Sutton reached 1st on a fielder’s choice to make it 9-0.

In the top of the 6th, Moreland reached base after a 2-out walk. A nice play over at 3rd base by Sutton on a dribbler by Kuna ended the top half of the inning and sent us to the bottom of the frame. Pearson, again fired another 1-2-3 inning  as he collected his first two strikeouts to send us to the 7th.

In the top of the 7th, Rogers, reached on a 1-out single. Pearson, was then hit by a pitch. With 2 outs, Densmore was able to induce a grounder to third for the 3rd out and the Dragons took this one, 9-0.

Trace Ledbetter: 1-3 with a hit by pitch, a single, and 1 run scored

Harlan Will: 1 hit by pitch

Logan Hughes: 1-3 with a single

Sawyer Moreland: 1-2 with a single, and a walk

Wyatt Rogers: 1-3 with a single