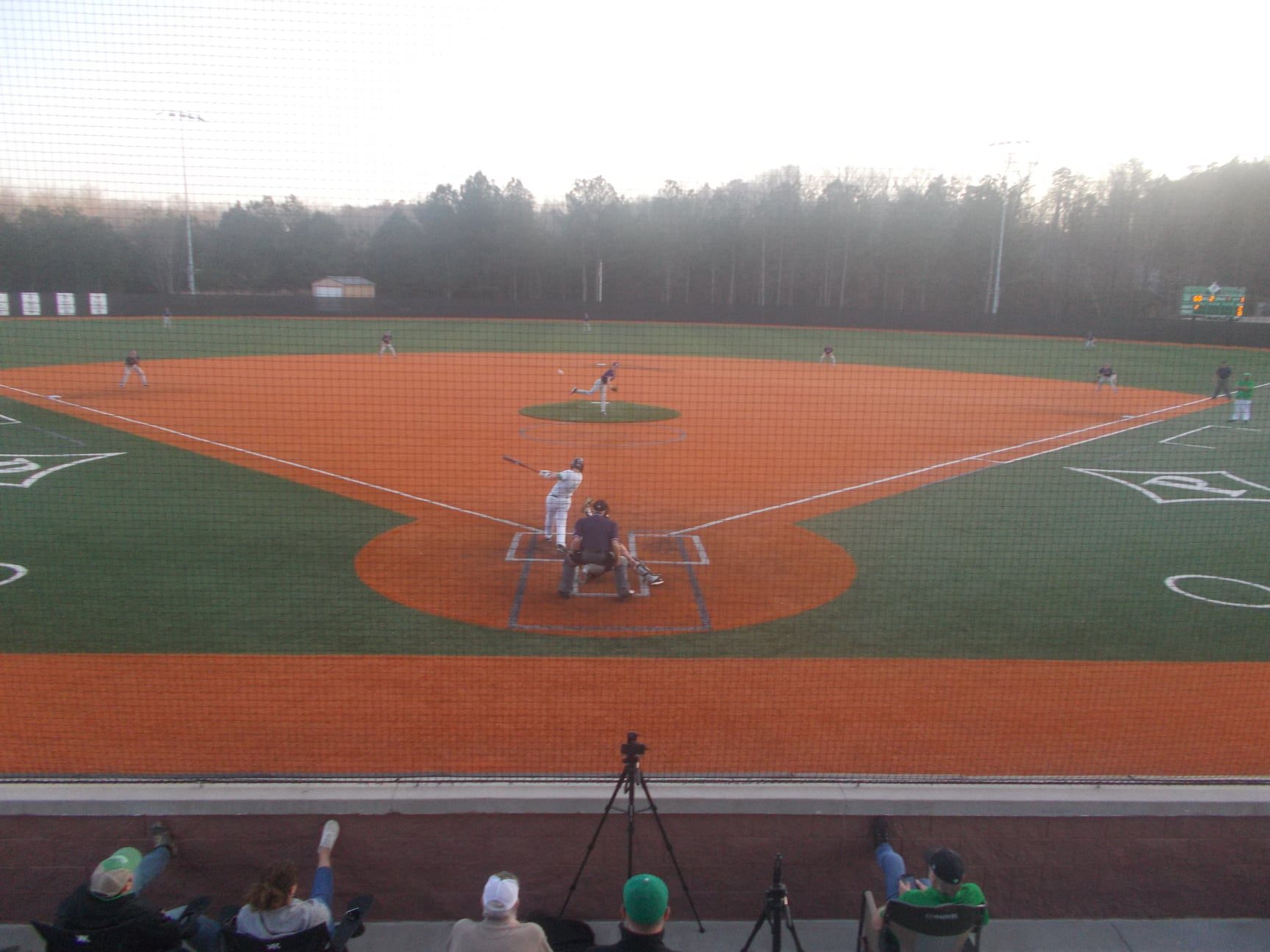 Jasper, Ga — The 515 rivalry made its way to the baseball diamond on Thursday, February 24th as the Pickens Dragons welcomed the Gilmer Bobcats to Dunn Field for non-region action. This, was the first game between the two teams as they will play in Ellijay next week, This time next year, these two teams will be in the same region again. The Dragons, came into this game at 2-0 after a home and home sweep against Dawson. The Bobcats, came in with a 3-0 record on the early season. The Dragons, got runs from the 2nd inning to the 6th inning as they took the first game against the Bobcats, 10-5.

J.P. Nunn took the mound to start for the Dragons and he got off to a quick start in the top of the first getting two quick outs. The Bobcats, were able to find some two out magic as Ethan McCollum and Grant Cochran reached base. The starting pitcher for Gilmer, Seth Darling, brought both McCollum and Cochran home on a double to give the Bobcats a 2-0 lead going to the bottom of the first. In the bottom of the first, the Dragons tried some two out magic of their own as Anthony Antinozzi got on with a two out double. The Bobcats were able to get out of the first inning with no damage done and still holding a 2-0 lead.

In the top of the second, Nunn settled down and got the Bobcats in order in a quick 1-2-3 top half of the frame. In the bottom of the second, The Dragons were able to tie things up at 2 a piece after James Tilley was hit by a pitch, and Colby Brooks drew a walk. Both scored after several throwing errors were made by the Bobcats. Going to the top of the third, we were tied at 2.

In the top of the third, Nunn again got the first two outs of the inning rather quickly. McCollum, got on again, this time via a two out single. Cochran then drew a walk as Gilmer was looking to retake the lead. Nunn, was able to rally and get a strikeout to send us to the bottom of the frame still tied at 2. In the bottom of the third, things got going for the Dragons after Trace Ledbetter reached base with one out. Antinozzi, hit one into the gap and brought Ledbetter home with a triple. Antinozzi then scored on an errant throw to make it 4-2 Pickens. After a double by Harlan Will, Trey Payne was able to bring him home with an RBI single. Tilley, then reached first after drawing a walk. Brooks, looked to keep the bottom of the third going, but would fly out to center to send us to the top of the fourth with the Dragons ahead, 5-2.

In the top of the fourth, the Bobcats clawed their way back into the game as Noah Gutillo drew a 1-out walk, Carter Jones followed that up with a 1-out single. Trey Payne, who came on in relief of Nunn, got a strikeout for the 2nd out of the frame. Branson Teague, got Gilmer within a run after a 2 RBI double to make it 5-4. Austin Zabala followed that up with a walk to put runners on 1st and 3rd as Teague was running on the 3-2 count. With McCollum up, Tyler Payne was able to throw out Zabala who couldn’t get back to first in time. Going to the bottom of the fourth, Pickens led Gilmer, 5-4. In the bottom of the fourth, Connor Shouse was able to draw a 1-out walk. After Ledbetter popped up to the second baseman, Antinozzi continued his big night with his third extra base hit of the game as he brought in Shouse with an RBI double to make it 6-4. Will followed that up with an RBI single to bring in Antinozzi to make it 7-4 Dragons going to the fifth.

In the top of the fifth, McCollum led off with a single. After Cochran popped out to third baseman Evan Giddens, Darling reached on a fielders choice. Tate Hales, who came on in relief of Trey Payne, got Billy Goswick to ground out to Giddens to end the top half of the fifth. In the bottom of the fifth, the Dragons looked to add to their three run lead. Trey Payne got things going with a lead off single. Tilley followed that by drawing another walk. Brooks, brought in Trey Payne with an RBI single to make it 8-4. After Giddens drew a walk to load the bases, Shouse was hit by a pitch to bring in Tilley to make it 9-4 Pickens going to the sixth.

In the top of the sixth, Hales continued a good outing as he got the Bobcats in order with three fly outs to send us to the bottom of the inning. In the bottom half of the sixth, Tyler and Trey Payne drew back to back 1-out walks. Tilley, was then able to drive in a run with an RBI double to make it 10-4 Dragons. Gilmer was able to get out of a jam as Pickens left the bases loaded as we’d head to the top of the seventh with the Dragons leading the Bobcats, 10-4.

Shouse took the mound for the Dragons in the top of the seventh to try to shut this one down. Teague, was hit by a pitch, then Zabala followed it up with a single. Cochran, brought home Teague on a 1-out single to make it 10-5 Pickens. After a lengthy discussion by the umpires with themselves and both head coaches for Pickens and Gilmer, it was determined that Cochran would be called out. Reason being, the Dragons were able to pull off a hidden ball trick. Shouse, was able to collect himself after a bit of a delay, and strikeout Darling for the final out. The final from Jasper, Pickens 10 Gilmer 5.

Austin Zabala: 1-3 with a walk and a single

Trace Ledbetter: 1-4 with a single and 1 run scored

The Dragons, now move to 3-0 on the season. They will now head down to Baseball at the Beach for a Saturday double header as they take on both North Springs and Long County. Baseball at the Beach is played at Edo Miller Park in Brunswick Georgia. The first game of the day for the Dragons will be against North Springs at 10 am. After playing that one and getting some lunch, the Dragons will then play Long County at 4 pm.