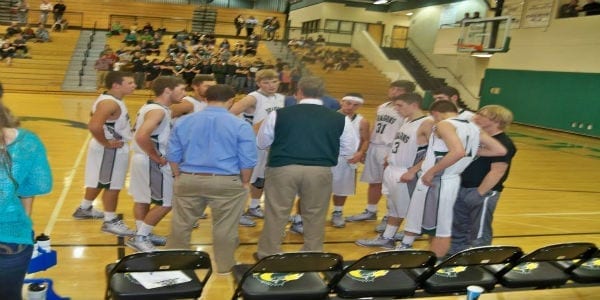 This past Tuesday, the Dragons varsity team opened up the 2014-15 season at home playing host to the Dawson County Tigers in the Dragons Den. The Dragons added several players to the roster after football season came to an end and it would be interesting to see how they would translate from the gridiron, to the hardwood. Nobody in the building could have predicted what was to come later on.
The first quarter saw back and forth action as the Tigers would hold a slim 12-10 lead over the Dragons going into the 2nd quarter. The 2nd quarter saw more of the same but Dawson again came away with a lead this time taking a 10 point advantage into halftime. The Dragons had the lead cut down several times in the 3rd but the Tigers still held the lead 37-29 heading into the 4th quarter.

Here is where the craziness ensues. The Dragons battled all the way back and tied the ball game up at 43 a piece and had the ball with 25 seconds left and a chance for the win. The final shot however would be missed and Dragon Nation would be treated to some free basketball. Pickens took their first lead of the ball game in the first overtime period but Dawson clawed it’s way back and tied it up at 49 all and there would have to be a 2nd overtime.

With 51 seconds to go in the 2nd overtime, Dawson had the ball and had a 56-53 lead but then stepped on the half court line and turned it over to the Dragons giving Pickens a chance to tie things up. Even though that shot would be missed, the Dragons got a second chance as Dawson missed a pair of game sealing free throws and the Dragons hurried past half court and called timeout with 2.2 seconds left to draw up a game tying three. The Shot was on line, but fell short and Dawson would win this thriller, 58-55.

Leading the way for the Dragons would be Shannon Brooks as he came off the bench to score 15 points, dish out 4 assists, grab 8 rebounds, and would do his JJ Watt impression and swat 3 shots

The Dragons now will turn their attention to Saturday as they will open the Thanksgiving tournament against Fannin at GHS. Tip off for that one is scheduled for around 4:30.