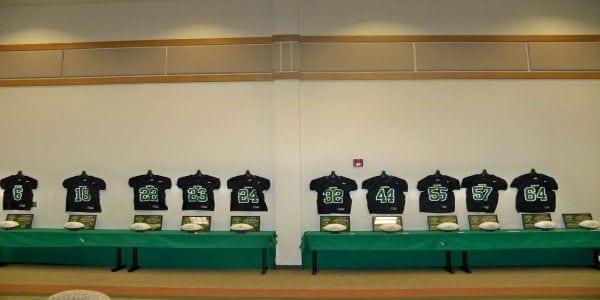 Last Night, the PHS football team held the end of season banquet at Chattahoochee Technical College’s Appalachian campus. The evening consisted of celebration and looking back on what was one of the most successful football seasons in PHS history. From finishing at 8-3, to making the playoffs for the first time since 2005, and hosting a playoff game for the first time since 2004, and of course beating Gilmer for the first time in five years.Before the letterman certificates and individual awards were handed out, head coach Chris Parker honored several people for their contributions to the program. One of the honorees was Sheryl Messner, who did a laundry list of things for the program the last several years. Coach Parker gifted her the actual game ball used to take the lead on Gilmer as a token of his and the teams appreciation for all she has done.

Caleb Cowart was honored with the prestigious Jim Locke Award

The PHS Touchdown Club created a Scholarship for seniors as they move on to college and the requirements are to play four years, no major discipline, and they have to write an essay on the impact of the football program

There were six players that were honored with this scholarship and these 6 deserving young men are:

It was an all around incredible night to honor and recognize everyone that played a part, big or small, in what was a season to remember.