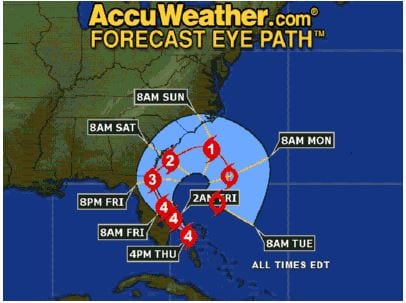 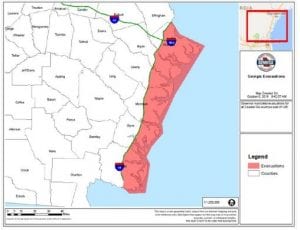 Late Thursday, Gov. Deal issured mandatory evacuation for the 500,000 residents of six counties along the Georgia coast.  This includes Savannah.  Intense wind, tidal surges and flooding is expected.  Gov. Deal has also encouraged evacuations of low-lying areas west of Interstate 95.  Intense winds, tidal surges and flooding is expected.  Tides could cover all of the barrier islands during the storm.  Low-lying causeways, like Savannah / Tybee could be impassable for days.  At his press conference, Gov. Deal said, “This can be a dangerous storm.  It can inflict loss of life.”  Florida and South Carolina began mandatory evacuations on Wednesday.

The storm is expected to hit Miami on Friday.  Forecasters cannot say if the eye of the storm will remain off-coast but do predict that the eyewall of Matthew will reach land.  On Thursday, Florida’s Governor has already issued warnings that winds could reach 140 miles per hour.

Savannah has not experienced a hurricane in over 100 years.  The Georgia coast does not have them ith the same regularity as, for example, Charleston, South Carolina.  Georgia’s coastline is slightly east of Florida and South Carolina.  The hurricanes have a tendency to move towards the west and not turn east for the short Georgia coastline.  Savannah sits on a sort of bay and the actual city is 18 miles up the Savannah River.  Extensive natural marshland and the line of barrier islands off Georgia’s coast also absorb effects of hurricanes.

There will, though be large areas of flooding, within Savannah.  The storm water drainage system is greatly affected by the level of the Savannah River.  As the river rises, it backs up the drainage system, leaving no room to take in rainwater from streets and buildings.  During Spring tides and Fall tides that accompany the equinox, water has covered River Street and can make the the Savannah / Tybee causeway impossible for a few days.