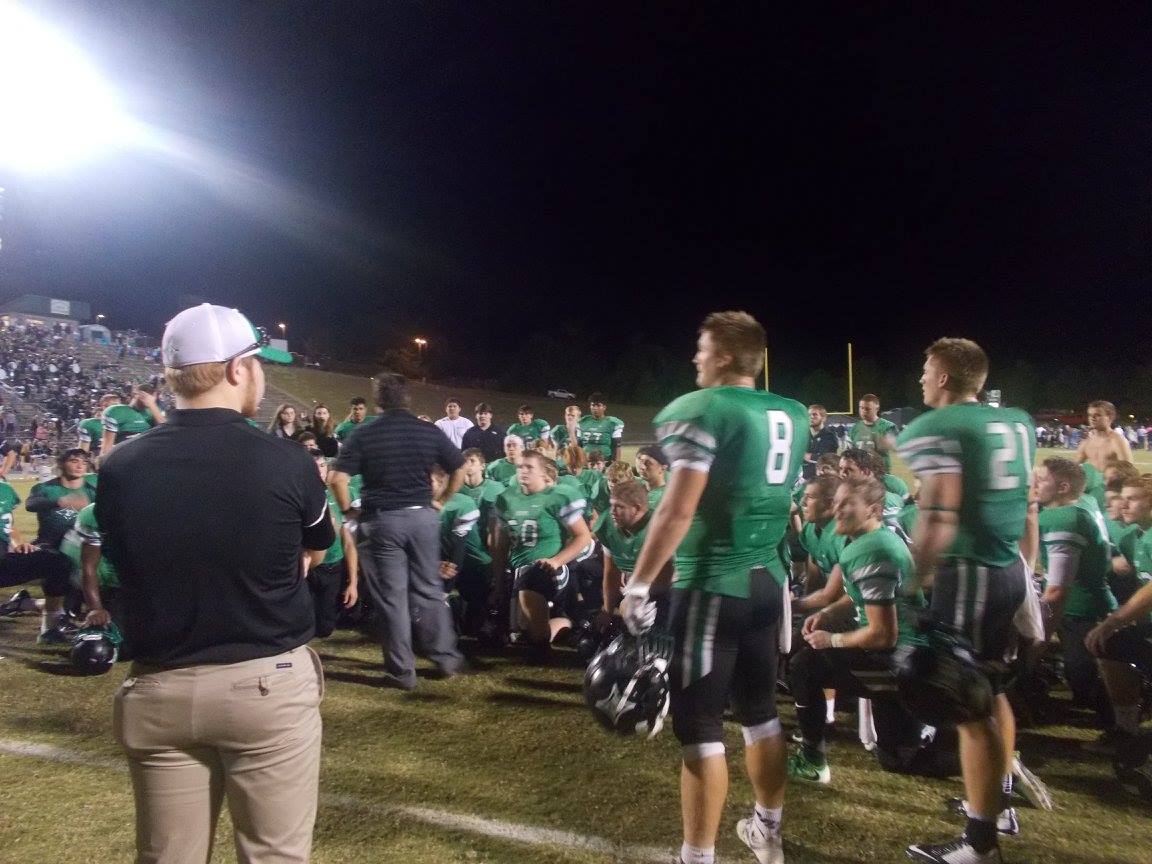 Last night, the PHS varsity football team hosted the Raiders of Southeast Whitfield in a 6-AAAA region match up for Homecoming. This was the first game at home for the Dragons since September 2nd. Coming into the game, Pickens held a 5-1 all-time series lead over Southeast Whitfield.

Pickens won the toss, but elected to differ to the 2nd half, giving Southeast Whitfield the first shot at points. After forcing a three-and-out, the Dragons offense took to the field at their own 29-yd line. They would not be on the field for very long as Jacob Brumby found Trevon Hawkins streaking across the middle for a 71-yd touchdown on the 1st play from scrimmage. The PAT hit the left upright, giving Pickens a 6-0 lead with 10:16 left in the opening quarter. With 6:26 left in the 1st, Chris Pittman found the end zone from 12-yds out, giving the Dragons a 13-0 lead going to the 2nd.

Both teams went back and forth in the 2nd quarter, trading possessions. The Raiders would attempt a field goal towards the end of the 1st half, but the Dragons were able to get a claw on it, sending us to halftime with Pickens ahead of Southeast Whitfield, 13-0. During halftime the 2016 PHS Homecoming Princess & Queen were crowned. Miss Olivia Moore was crowned princess, while Miss Autumn Young was crowned queen.

The Dragons started off the 2nd half with possession. However, the possession would not last too long as the Raiders recovered a fumble deep inside Dragon territory and would turn it into points after a 6-yd run at the 10:50 mark to cut the Pickens lead to 13-7. The Dragons stretched their lead to 9 at the 6:27 mark after a 25-yd field goal from Rudy Perez, making it 16-7. Just before the end of the 3rd, Southeast Whitfield punched it in from a yard out, making it 16-14 Dragons going to the 4th.

Pickens added to their lead early in the 4th with a 2-yd run from C.Pittman, making it 22-14 with 9:04 left in the game. The Dragons held the Raiders on their 1st possession of the 4th quarter then would go to work using the run game. Pickens chewed nearly 7 minutes off the clock in the 4th quarter giving Southeast Whitfield only 9 seconds to work with deep in their own territory. The Raiders’ final play was stopped well short of the goal line by the Dragons defense and Pickens came away with the win, 22-14.

With the win, Pickens is now at .500 on the season at 3-3 overall and now tied for 1st in 6-AAAA with Ridgeland at 2-0. Next week, the Dragons will be back on the road as they head to Tunnel Hill to take on the Bruins of Northwest Whitfield in a crucial region game. Northwest Whitfield is currently tied for 3rd in the region at 2-1 and is 4-3 overall after defeating Heritage this past Friday. Game time is 7:30