This week’s #TeamFYNSports Players of the Week are Kealy Hillhouse & Zach Goss. The Nettes & Dragons only had one game this week as they hosted Southeast Whitfield for Senior Night.

Kealy Hillhouse, has really stepped up her game as the season has gone by. She was a big part of the Nettes’ win over Christian Heritage the week before, & continued that play against the Lady Raiders finishing with 4 points, 2 assists, 3 rebounds, & 1 steal.

Zach Goss, led the Dragons in scoring in this, his final home game as a Senior. Goss, finished with 22 points, 2 assists, 8 rebounds, & 2 steals.

This week’s #TeamFYNSports Players of the Week are two Seniors. Olivia Simmons & Zach Goss. This week started region play for both the Nettes & the Dragons as they both went 1-1 during the week.

Olivia Simmons, can do just about anything you ask of her on the court. She can get rebounds, she has great vision when it comes to her passes. She can also knock down a three if you need her to. The Nettes’ faced Heritage & Ridgeland this week. Against the Lady Generals, Simmons had 2 points, 3 assists, 3 rebounds, & 1 steal. Against the Lady Panthers, Simmons tallied up 8 points, 8 assists, 10 rebounds, & 1 steal

For Zach Goss, he lit up the score book against Heritage & Ridgeland. Goss led the team in scoring during the week. Against Heritage, Goss had 24 points, 4 assists, 5 rebounds, & 2 steals. Against Ridgeland, Goss finished with 27 points, 3 assists, 6 rebounds, 1 steal, & 2 blocks. 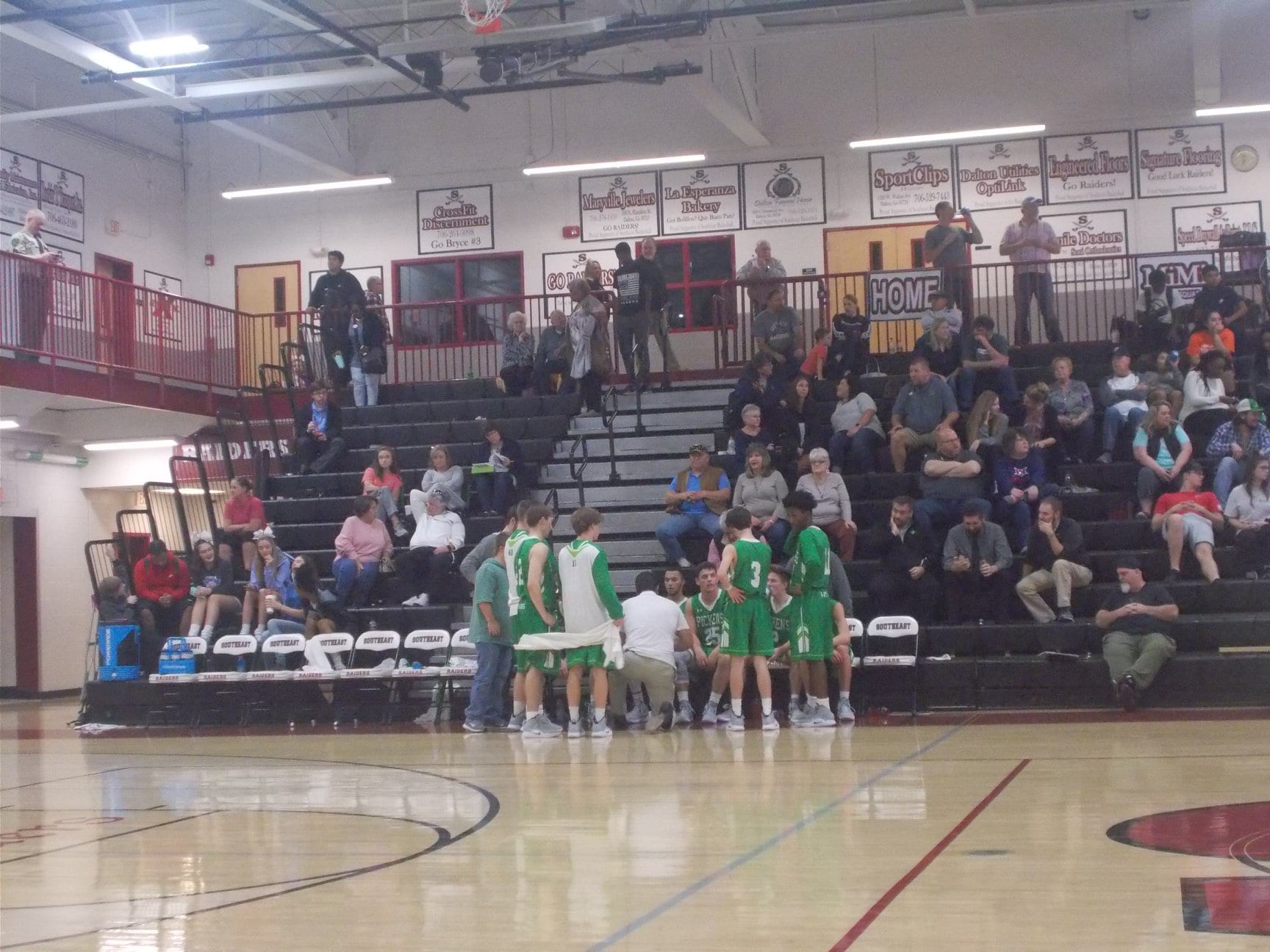 Late afternoon yesterday, the PHS Dragons varsity basketball team traveled to Southeast Whitfield to begin their part of the 6-AAAA Region Tournament. Pickens, came in as the #6 seed, while their opponent, the Heritage Generals, came in as the #3 seed. Pickens & Heritage split their meetings during the regular season. The winner, would advance to the 4A State Tournament, & to the semifinals.

In the 1st, the Dragons came out aggressive, & making three pointers early. Tucker Lowe hit 3 three’s, & Andrew Smith nailed a three to lead Pickens to a 18-16 lead after the 1st quarter. In the 2nd quarter, the Generals made a run, but the Dragons were able to keep it close. Going into the break, Heritage led Pickens, 32-28.

The 3rd quarter saw the Generals pull away a little bit using a 20-9 quarter run, but remember, we have seen Pickens come back from down double digits in the 2nd half in games late this season. Going to the 4th, Heritage held a 52-37 advantage. In the 4th, both teams scored 11 points a piece, as the Generals came away with the win, 63-48. 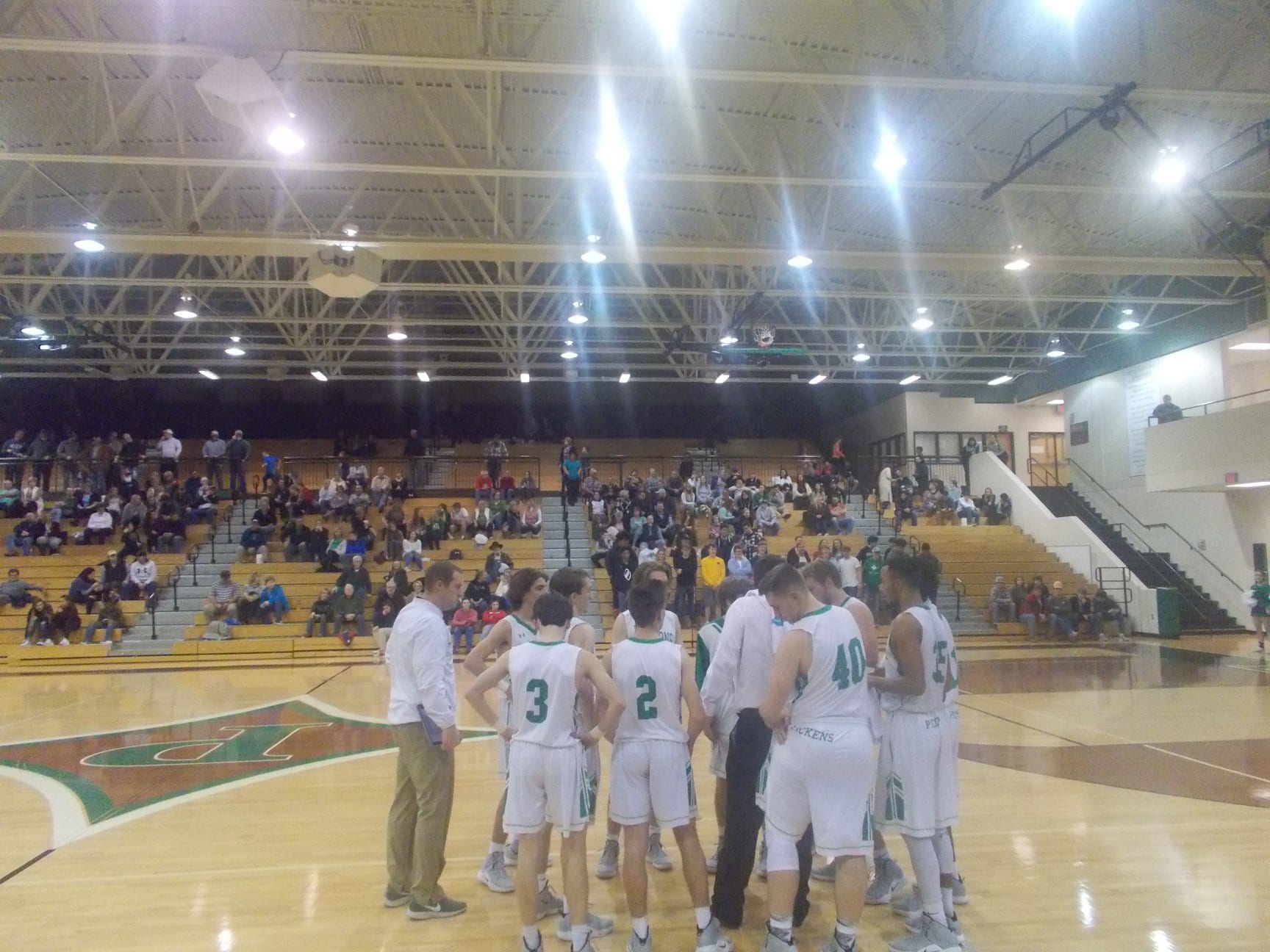 After the Nettes’ big win, the Dragons took the floor to take on the Raiders of Southeast Whitfield in their final game of the regular season. Coming into the game, Pickens knew where they would be next week when the region tournament starts, but looked to get some momentum built going into it.

Southeast Whitfield, got off to the quick start in the opening quarter, but the Dragons were able to cut into the lead & the Raiders held a 14-9 advantage going to the 2nd. In the 2nd, the Raiders outscored Pickens 16-9, to extend their lead to 30-18 going into the break.

In the 3rd, the Raiders outscored the Dragons slightly, 14-12, to extend their lead to 44-30, going to the 4th and final quarter. In the 4th, Pickens, did what they’ve done lately & made things interesting at the end. Trailing by 14 to start the frame, the Dragons stormed back and got within a couple of points of Southeast Whitfield. Pickens, outscored the Raiders 21-14 in the 4th, but Southeast Whitfield was able to hit a few late free throws to seal it, 58-51.

Pickens, will now look towards the 6-AAAA Region Tournament being held at Southeast Whitfield next week. The Dragons, will come in as the 6th seed, & take on the 3rd seeded Heritage Generals in the 1st round on Tuesday. Pickens & Heritage split their two regular season meetings with each winning on the others floor. Tip off is set for 6 pm. 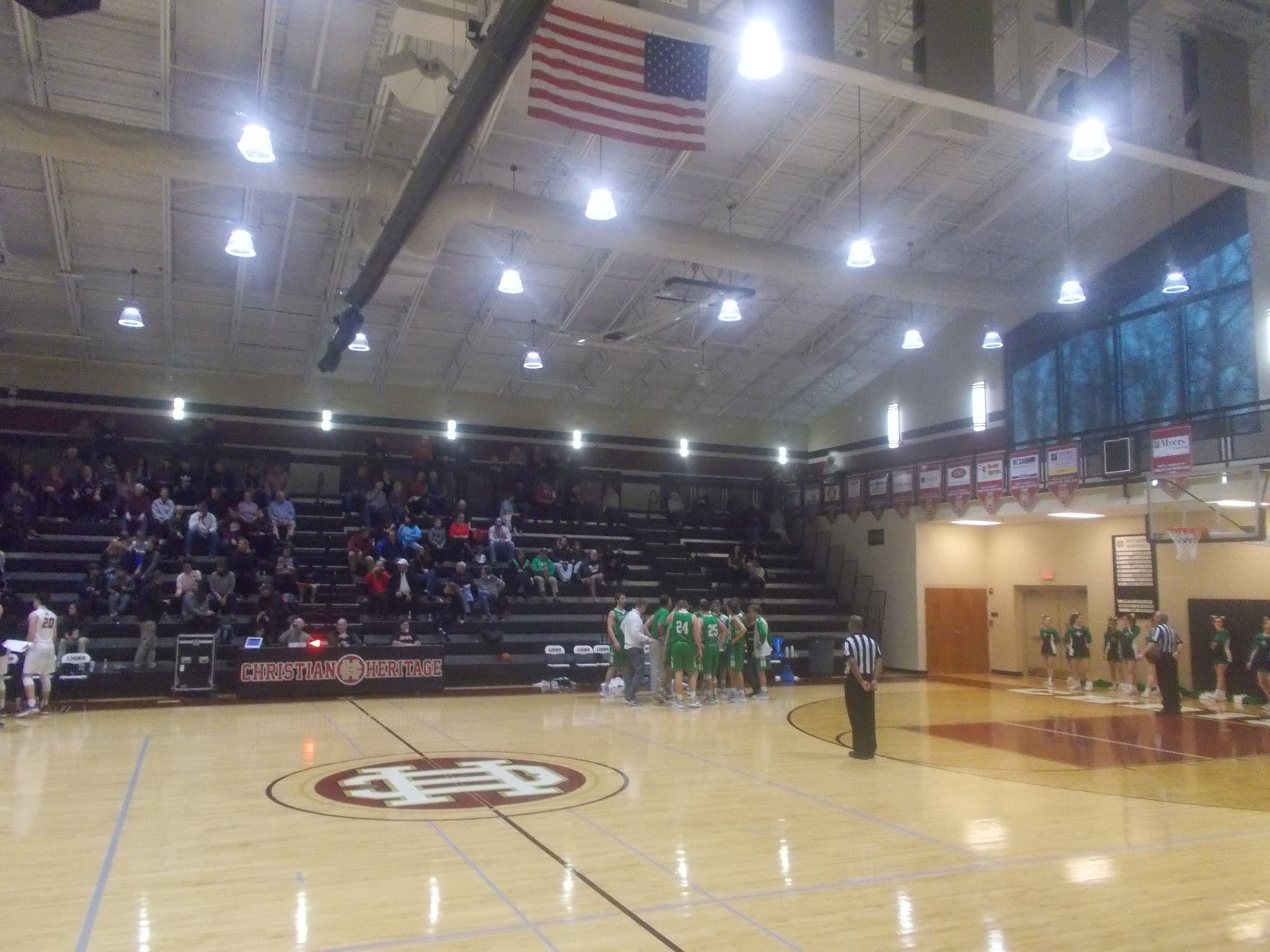 The Dragons, like their Nettes’ contemporaries, have had an up & down week. On Tuesday, they fell at the last second to their rival Gilmer. On Friday, they went on the road to Northwest Whitfield, & stunned the Bruins after being down 14 in the 3rd quarter. Saturday, they went back on the road to take on a 17-4 Christian Heritage team in the final non-region game for the regular season.

In the first quarter, the Dragons started off on a 6-0 run. The Lions, closed the quarter on a 15-6 run to take a 15-12 lead over Pickens, going to the 2nd. In the 2nd, Christian Heritage was able to extend their lead using a 23-12 quarter run. Going into halftime, the Lions held a 38-24 lead over the Dragons.

The Dragons, are scheduled to host the Southeast Whitfield Raiders for Senior Night on Tuesday at 7:30. However, that game might be moved due to the probability of some incoming winter weather. Keep an eye out for any game time changes this upcoming week. 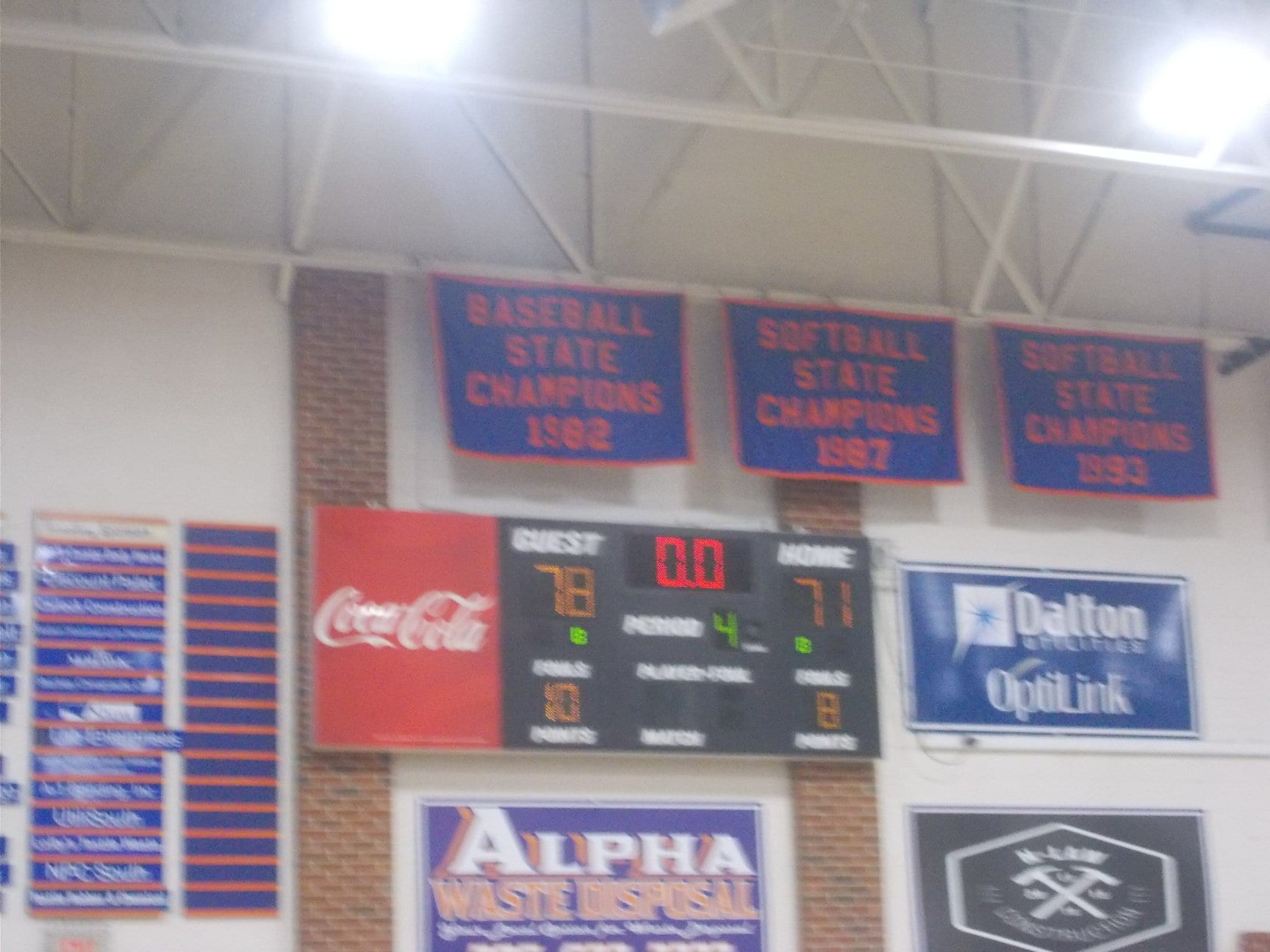 The Dragons, came into this game looking to avenge a loss from earlier in the season, & to try and rebound after a tough last second loss in Ellijay on Tuesday night.

In the first quarter of this one, it was the away team that got out to the quick start as Pickens jumped out to a 9-2 lead early on. As the quarter came to a close, the Dragons kept their early lead, and took a 16-12 advantage over Northwest Whitfield going to the 2nd. In the 2nd, the Bruins got things going on their end outscoring Pickens 25-14, to take a 37-30 lead going into the break.

Pickens came back in the 3rd quarter & cut into the Bruins lead, keeping it within striking distance. The Dragons, outscored Northwest Whitfield 18-17 in the frame as the Bruins held a 54-48 lead going to the 4th. In the 4th, the Pickens offense exploded. The Dragons, using a 30-17 run in the final quarter, took this one away from Northwest Whitfield & picked up the win, 78-71.

Like the Nettes’, the Dragons will also be in Dalton later today as they take on the Christian Heritage Lions in non-region action. Tip off scheduled for 5:30. 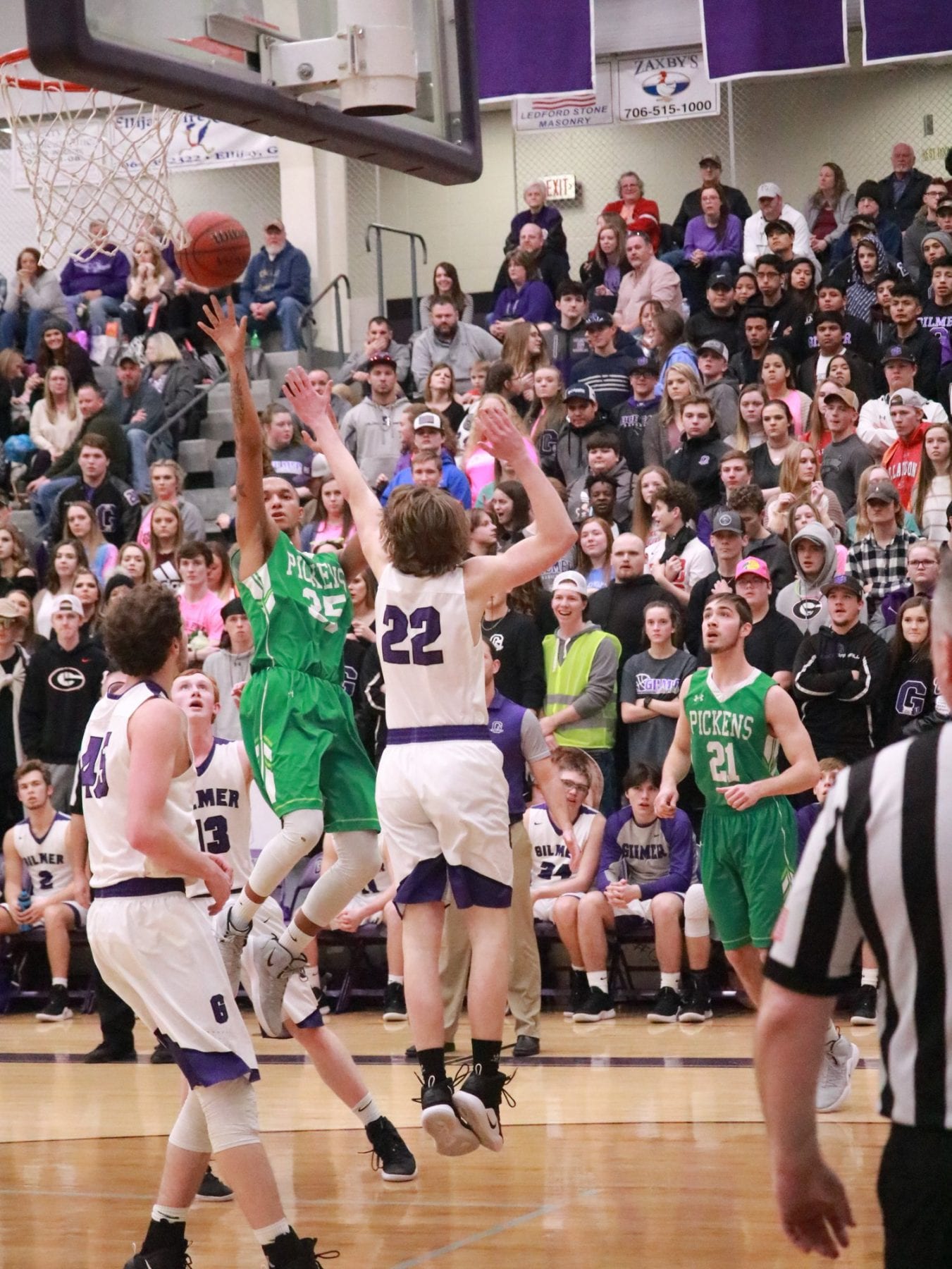 After the girls game, it was time for the Dragons to take the floor against the Bobcats. Like the Lady Cats, the Bobcats came in 2nd in the region, with Pickens a little further back in 6th, but still with time to make some noise prior to the region tournament.

Much like the game before this one, both teams traded buckets with one another the entire first quarter. Gilmer, took a 13-11 lead going to the 2nd. In the 2nd, it remained close towards the end of the half when the Bobcats made a run. Gilmer, outscored the Dragons 21-12 to take a 34-23 lead into the break.

The scoring in the 3rd quarter remained close as the Bobcats barely outscored Pickens 12-11, but in the process stretched their lead by one, 46-34, going to the 4th & final quarter. In the 4th, the Dragons made a furious comeback. Down 12 to start the quarter, Pickens outscored the Bobcats 18-7 in the frame. As the clock was draining down to the final seconds, the Dragons had three opportunities for the the game winning shot. However, the shots wouldn’t fall, & the Bobcats escaped with a 53-52 win.

The Dragons, will look to shake off that tough defeat as they head to Northwest Whitfield to take on the Bruins in another region match up. Tip off scheduled for 8:30.

This week’s #TeamFYNSports Sports Writer basketball Players of the Week are Mykenzie Weaver & Zach Goss. The Nettes’ & Dragons, only had one game this week, and these two played big roles in their games.

For Mykenzie Weaver, she has played well all season, even surpassing the 1,000 career point mark before Christmas of her Junior year. Weaver, led the Nettes in scoring on Friday in their win against the LaFayette Lady Ramblers. Weaver finished with 32 points, 4 assists, 5 rebounds, & 2 steals.

Zach Goss, has been a leader on this Dragons team in this his Senior year. The Tennessee Tech football commit, has helped out the Dragons basketball team in many ways. Goss, finished with 12 points, 4 assists, & 2 steals against the LaFayette Ramblers Friday night.

The Nettes & the Dragons will be on the road this week as they have two region games, & their final non-region game of the season on tap. First up, a match up with their 515 rival Gilmer in Ellijay on Tuesday night. The Nettes, will tip of at 6, followed by the Dragons at 7:30.