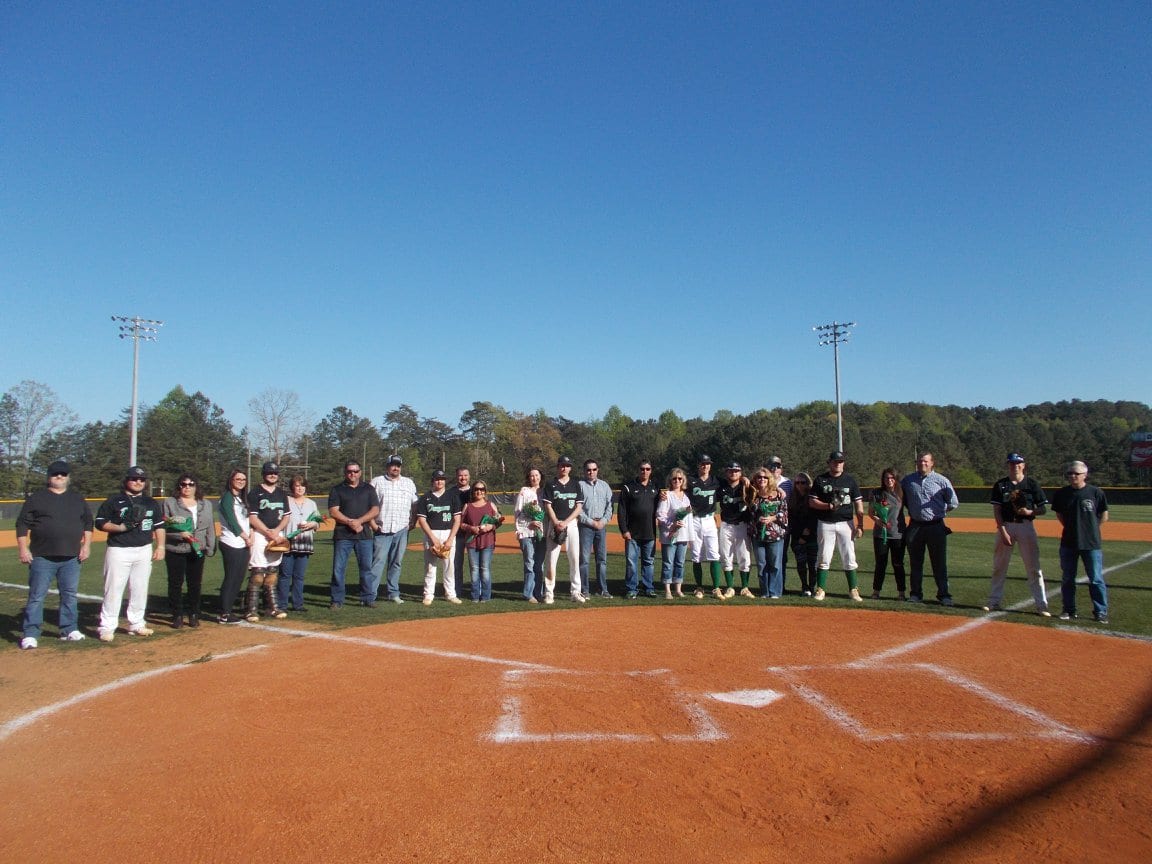 Yesterday afternoon, the PHS varsity baseball team once again hosted the Southeast Whitfield Raiders at Dragons Field for the 3rd and final game of their series, & the final game of the region schedule. Prior to the game, the seniors on the 2018 PHS baseball team were honored for their contributions to PHS during their time.

In the top of the 1st, senior starter Isaiah Payne, had it working early. Payne needed just 10 pitches to get out of the top half of the 1st. Pickens, got a lead off single from senior Joseph Gossett, but Gossett would be left stranded at 3rd, & we would head to the 2nd, tied at 0. In the top of the 2nd, Payne continued his good early work by striking out two Raiders in the frame. In the bottom of the inning, A 1-out single from Colby James, a walk drawn by senior Lucas Headrick, and a single from Payne, would lead to a 2-out, 2-RBI base hit from Gossett as the Dragons took a 2-0 lead over Southeast Whitfield, heading to the 3rd.

Payne, now working with the lead, continued giving the Raiders trouble as he got out of the inning, using 16 pitches. In the bottom of the 3rd, a lead off walk drawn by senior Dylan Huffman, came back to bite Southeast Whitfield as Brady Moore drove Huffman in with a 1-out double. Moore would go on to steal 3rd, then come into score after a pitch got by the catcher. Pickens took a 4-0 lead, into the 4th. In the top of the 4th, the Raiders got their first hit of the game, but that would be all. In the bottom of the frame, Gossett, got a 2-out double, but would be caught trying to steal 3rd to end the inning. Going to the 5th, the Dragons held a 4-0 lead over Southeast Whitfield.

In the top of the 5th, Payne would throw one more pitch, then would be replaced with fellow senior, Clate McArthur. McArthur, would collect his 1st K of the day, & get out of the half inning on 11 pitches. In the bottom of the 5th, Huffman, got a 1-out base hit, Moore would be hit by a pitch, then James would get a 2-out RBI hit scoring Huffman to give the Dragons a 5-0 lead, going to the 6th. In the top of the 6th, Southeast Whitfield would plate 2 runs, cutting the Pickens lead to 5-2. The Dragons, got one of those runs back in the bottom of the inning after Gossett hit a 1-out triple, & then came into score after Huffman drove him in after beating out a potential inning ending double play. The Dragons, held a 6-2 lead going to the 7th. McArthur was able to hold down the Raiders in the 7th, to preserve the Dragons win, 6-2.

Pickens, wins the series between Southeast Whitfield 2-1, & finishes the region schedule at 9-9. They are 14-14 overall with one more game to play in the regular season. There will be a makeup game today at PCMS as the Dragons will welcome the Wheeler Wildcats to Dragons Field for afternoon baseball. First pitch is scheduled for 2 pm.