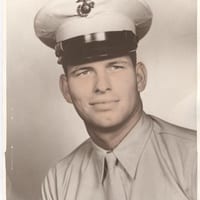 Beecher Wayne McDaniel, Jr (AKA: Wahoo) of Woodstock, GA graduated from this life on May 30, 2018. He was born on September 10, 1942 to Beecher Wayne and Margarette Elizabeth (Cato) McDaniel in Mullins, SC and grew up in Nichols, SC. He loved the outdoors, creating things, and tinkering in his shop. He was a proud Marine veteran who served in the Vietnam Conflict. After retiring from IBM he loved to travel the back roads of America and be out in the swamps and rivers. He loved his family and enjoyed sitting around and talking with old friends and new friends he would meet in his adventures. He had a giving heart and helped many around him. He is preceded in death by his father, mother, and second wife Jeanella Fifer. He is survived by his daughters Debbie (Bruce) Palmer (and their children Lea (Nathan) Frappier, Robert Palmer, David Palmer, and Cato Palmer); Becky (Jeff) Radant (and their son Ricky Radant); and Brenda Pratt (and her daughters Emily Pratt and Olivia Pratt and their father Garrett Pratt) along with their mother Marilyn Sallee. He requested not to have a funeral or memorial, so to honor his memory go out and enjoy Mother nature around you and reminiscence with his memories. In lieu of flowers please donate to an organization in your area that assists military veterans.