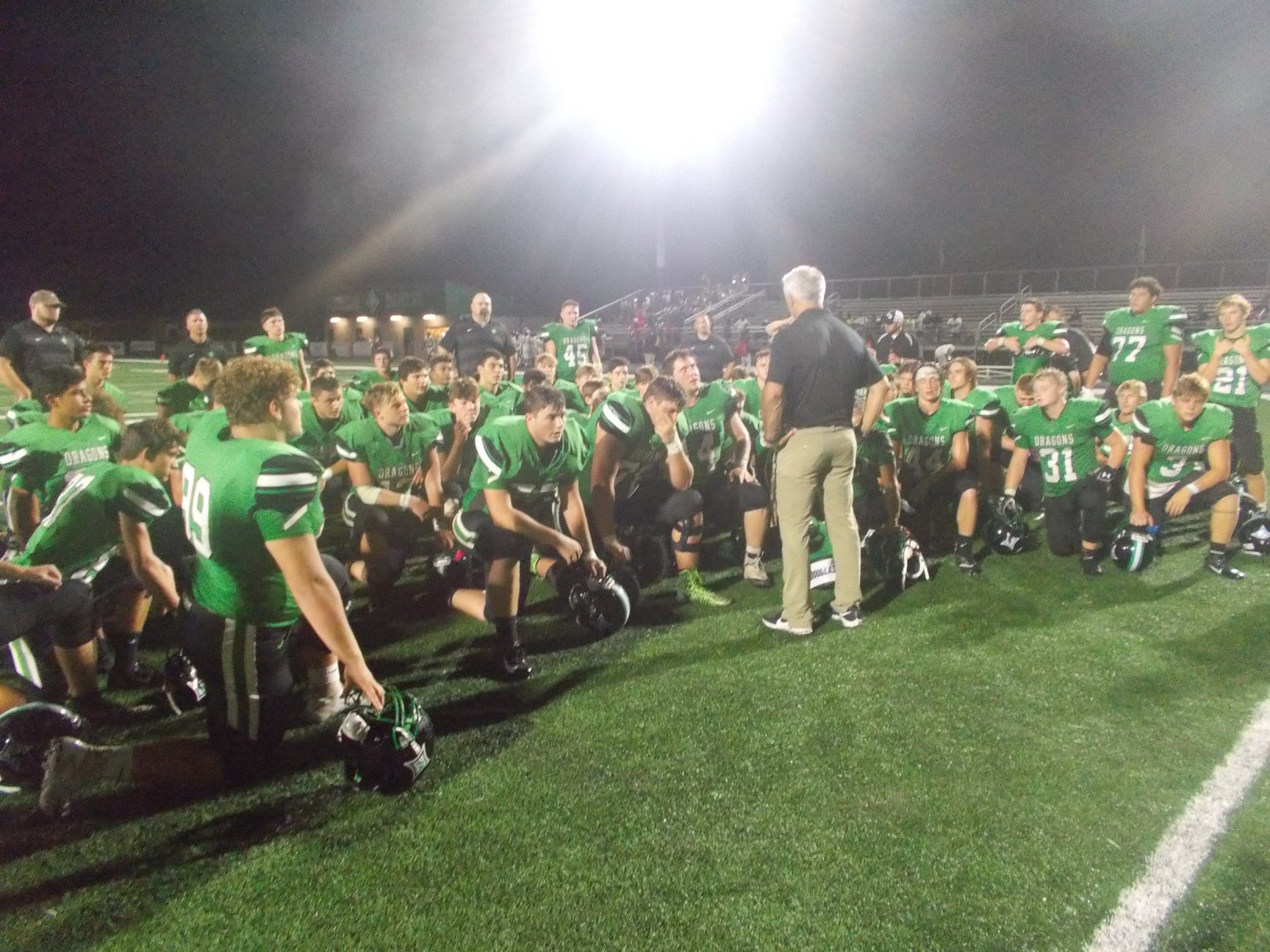 The Pickens High School varsity Dragons football team kicked of their 2019 season last night as they welcomed the Stone Mountain Pirates out of the 3-A classification to Dragons Stadium. It was an exciting night as many fans filled the home side to get a look at the defending 6-AAAA region champs in action. Prior to the game, the youth program all the way from 6u to 11u were recognized. They even got to greet the varsity players as they ran through the banner prior to kick off.

Pickens, got things started with several big runs & their opening drive was capped off by a 1-yd touchdown run by Senior QB CJ Streicher. Defensively, TC Jarrett would come up with a gorgeous interception after the pass attempt by the Pirates was batted around a couple of times. After one quarter of play, the Dragons, held a 7-0 lead. Stone Mountain cut into that lead rather quickly as they scored a 1-yd touchdown themselves just as the 2nd quarter was getting underway. the 2-point conversion was no good for the Pirates & the Dragons still led 7-6, with 11:55 to go in the half. Almost halfway through the 2nd quarter, Streicher found Mykel Hand, who made a great catch in the left corner of the end zone from 18-yds out, to make it 14-6 Dragons with 6:09 left in the half. Streicher would connect with fellow Senior Alex Snelgrove on a 24-yd strike to make it 21-6 Pickens with 2:23 left in the half. Pickens would find points once more as Tucker Lowe, picked off a pass just beyond midfield, & took it all the way for a house call to make it 28-6 Dragons over the Pirates at the half.

The third quarter saw both teams going back and forth fighting through a heavy fog that had made it’s way down to the field. The fog made it tough for both teams as the game remained 28-6 going to the fourth as no scoring occurred in the 3rd. In the 4th, the Pirates made it a little closer as they scored twice in the final frame. The first score of the quarter came after a 40-yd touchdown run. The 2-point conversion was unsuccessful, & the score was now, 28-12 Dragons. Stone Mountain scored one more time just as the fianl horn was sounding to make the final score, Pickens 28 Stone Mountain 18.

With the win, the Dragons extend their regular season win streak to 11 in a row. Pickens, will now look to buckle down on anything they need to correct as they now have two weeks to prepare for their next game. That game, will be on the road in Lindale, Georgia as they take a team that’s become quite familiar over the last couple of seasons, the Pepperell Dragons. Both teams will be coming off bye weeks & if history tells us anything, it’s that this game is sure to be an exciting one. Kickoff is scheduled for 7:30 pm.