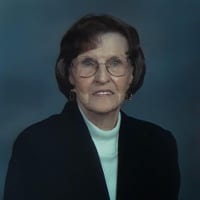 Please join us in celebrating the homegoing of our beloved mother, friend and sister in the Lord, Doris Beck, who passed away on Friday August 30, 2019. As much as we miss her, even more we rejoice because she is now with her Lord and Savior, Jesus Christ.

Doris was born March 21, 1925 in Thomas County, Georgia to Archie and Annie Mae Chastain. She lived much of her adult life in California, where she worked in personnel. She then went to Florida to help care for her mother. There she worked in food service. Doris was a tireless worker in the various Full Gospel churches she attended and always tried to put the Lord first in her life.

Doris chose to be cremated and a memorial service will be held at 2:00 PM Tuesday September 3, 2019, at Cagle Funeral Home.

In lieu of flowers, donations may be made in her honor to the church of your choice, or Pickens County Animal Shelter: 3563 Camp Rd. Jasper, GA 30143.

Cagle Funeral Home is honored to serve the Beck family.