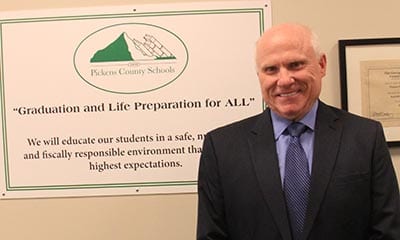 PICKENS COUNTY, Ga –  Several sources have told Fetch Your News that Superintendent Dr. Carlton Wilson received a 24-hour ultimatum to resign or be terminated from his role during a called board meeting on Wednesday, Dec. 18 at 3 p.m.

Fetch Your News can’t confirm these reports as board members can’t discuss what takes place during executive session.

The meeting agenda listed executive session and personnel as discussion topics. After spending two hours and forty-five minutes in executive session, the board members emerged and announced that “no action was taken.”

Wilson spent the majority of the meeting outside of the executive session, before the board called him into the closed room around 5 p.m. If Wilson and his position were the subject of discussion, then he wouldn’t have been allowed in the room. Traditionally, a superintendent is present in the closed meetings. 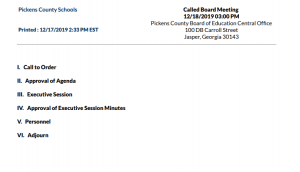 The agenda listed executive session and personnel as items up for discussion in the called meeting.

Fetch Your News doesn’t know the reasoning behind the unconfirmed ultimatum, but will update this story as soon as information becomes available.

Several Pickens County Citizens drifted in and out between 3 and 5:45 p.m. to try and find out what was happening. However, the mid-afternoon session meant many couldn’t stay until the end. Some appeared visibly upset at the situation and possibility of the superintendent Wilson’s termination.

The board finally adjourned at 5:45 p.m. with no discussion as to why the meeting was called before departing. If they did present Wilson with an option to resign or be terminated, they did so behind closed doors. As previously stated, Fetch Your News can’t confirm this occurred during the almost three hour meeting.

Board member Sue Finley mentioned the possibility of an emergency board meeting being called sometime this week for further discussion of what they discussed in today’s executive session. She also added she wasn’t pleased with the Dec. 18 called meeting being held at 3 p.m. since it prevents people who work during the day from attending.

Called meetings must provide the public with 24 hours’ notice to give everyone an opportunity to attend. Therefore, it’s unclear if a meeting will be held on Thursday or Friday.

Wilson and the board of education have dealt with several contentious issues this school year including potentially arming staff, transgender bathrooms, and school threats. It’s unclear if any of these issues or other disagreements went into the decision to call the Dec. 18 meeting.