On Tuesday, Feb, 4, the Pickens Dragons traveled to Dalton to take part in the 6-AAAA Region Tournament being held at Southeast Whitfield. Pickens, came into the tournament as the #3 seed and looked to do something they had only done six times in their history. That is, make the state tournament. The Dragons took on the #6 seed Ridgeland Panthers. The first two meetings between the two teams were very close. This time, Pickens picked up an 87-47 win.

In the opening quarter, the Dragons got off to a fast start knocking down shots from both inside and outside the paint. Pickens used that blazing start to amass a 25-12 lead over the Panthers going to the second. 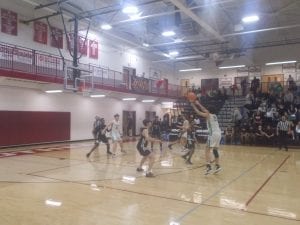 In the second quarter, the Dragons continued their torrid pace they set in the first quarter. Grabbing rebound after rebound, diving for loose balls, and continuing to work hard on both ends of the floor. Pickens, outscored Ridgeland in the second, 21-8, to take a 46-21 lead into the break. 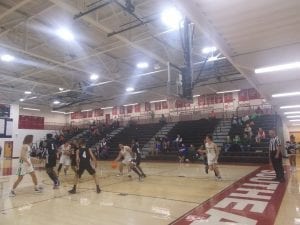 Aidan Sanchez working down low in the paint

The third quarter, was the most back and forth quarter of the game as the Panthers got things going on their end. After a slow start to the second half for the Dragons, they were able to pick it up as well. Ridgeland won the quarter 18-17, but Pickens continued to lead the game going to the fourth, 63-39. 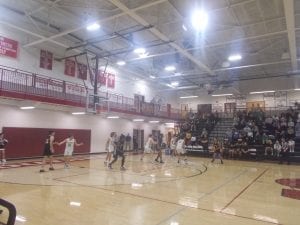 Dragons working defensively against the Panthers

The Dragons ended the ball game strong scoring 24 fourth quarter points and holding the Panthers again to just eight. Pickens also got everyone in for playing time and they were productive as well. For the seventh time in school history, the Dragons punched their ticket to the state tournament with an 87-47 win.

Pickens, will now turn their attention to the Northwest Whitfield Bruins for the semifinal match up in the 6-AAAA Region Tournament. Winner of that one will earn not only a trip to the region championship, but the all important first round home game in the 4A state tournament. Game time is set for Thursday at 5:30 pm.