Members of the Pickens County Board of Elections met Tuesday to discuss the August 11 run-off and the November 3 general election.

The Pickens County Board of Elections is gearing up for the August 11 run-off but anticipate a much smaller turnout than for the primaries and general election in November. The Board of Elections met Monday to discuss both elections and what changes to expect.

Brad Raffensberger, the Georgia Secretary of State, has told election officials there should be tech support at each precinct.

“That’s a big undertaking to get them trained and in place,” said Julienne Roberts, supervisor of elections, adding the cost will fall on the counties.

“I’m glad we have a small election before the big one because it gives us a chance to work out the kings and train the new managers,” she said.

The Board of Elections has two vacancies for poll managers, one at the Refuge precinct and the other at the Appalachian precinct.

She said early voting went well for Pickens County, which had 2,703 participants.

“Only one person didn’t like the new system,” she said. She said other than that, the new system, where people vote in the booth and their ballots are printed out, was well received. They tried to discourage people from folding the ballots moving from the booth to the scanner, where the ballot is scanned, but the scanner would still take it.

She said the only other incident they experienced involved privacy in the voting booth when they discovered a father was texting his adult son who to vote for.

Roberts said the ballot drop boxes will be out for the remainder of the year and in theory, should only be used for absentee ballots. In reality, other objects are being tossed in. 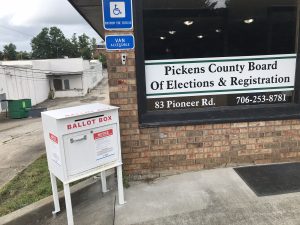 The ballot drop box will remain in place, but Julienne Roberts, Supervisor of the Board of Elections, said it is only for absentee ballots after a variety of items, including a tax payment were found.

“I’m finding the absentee ballot applications, signature letters,” said Roberts. On the flip side, other departments are getting ballots. “People were dropping their ballots in the boxes for the water bill. They are shoving these things anywhere they will go.”

In one case, she found a tax bill in the ballot box that had a check in it. She made sure it went to the proper office.

Wil Bell, another boardmember, said that he was able to educate the nursing staff at the hospital when he delivered a ballot to a patient.

“They didn’t want to let us in because of the visitor ban,” said Bell. “I explained to them that it was his constitutional right to request a ballot and our obligation to see he gets it.”

The board has a few decisions to make ahead of both the August 11 run-off and the November 3 elections. They need to decide if they want to open absentee ballots early or not. Opening early requires some legal considerations, such as ballot security and witnesses.

“We don’t really have the room here,” said Roberts.

However, they can use an off-site location providing it’s not readily accessible to candidates and security can be provided.

While it may not be an issue on August 11, the November election should be much larger. In the 2016 general election, 83-percent of registered voters in Pickens County turned out.

“It’s unclear where we are going to be as far as this virus in November,” said Bell. “We need to consider that we may need to open those ballots early to keep our heads above the water,” said Bell.

“I think we need a plan B, even if end up not needing it,” said Brindell.

The next meeting for the Board of Elections is scheduled for Aug. 14 to certify the elections at 5 p.m.