One issue discussed was budget amendments due to the economic downturn caused by the pandemic.

“We thought we should bring forward a mid-term packet since we’ve had a downturn in revenue,” said Brandon Douglas, city administrator. He said there was nothing to vote only information to keep in mind for next months regular meeting. 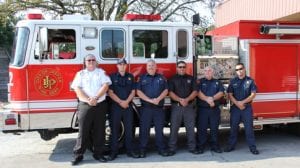 He added that some unforeseen, but necessary purchases included new fire gear for the fire department, which the council approved earlier this month and there were also some legal fees and services the city needed to pay for. New workstations for customer service in the water department were also needed.

Councilmember Jim Looney agreed and added they may have to look at other budget amendments.

Douglas asked the council to look at their options with their Georgia Environmental Finance Authority or GEFA loan and consider their options. The first option is to do nothing and leave the loan alone. The payments would remain the same and in 2035, the total amount paid would be $5,062,567.

The second option would be to refinance only for the amount owed. Payments would remain the same but the  total amount paid in 2035 would be $4,987,609, netting a $74,958 savings. Both options have declining payments.

Douglas presented the information for the board to consider heading into their meeting on July 13.

City Attorney David Syfan told the city council that GEFA has allowed a six-month deferment on current loans due to communities being uncertain about their budget. The city has seven loans through GEFA for water and sewage. The deferment means no interest and no payments for six months.

The city council approved the motion to sign the paper to take advantage of the deferment.

Syfan also asked the council to consider hiring a bond council for refunding five of the GEFA laons in order to meet legal requirements. The motion supported two legal service agreements to accomplish that and was approved.

The board also approved Resolution No. 2020-03 as it pertains to the reimbursement of the city in regards to the capital expenditures with design, construction, and installation of the Waste Water Treatment Plant expansion and improvements with the USDA Loan/Grant.

Consideration and Approval of Resolution No. 2020-03 as it pertains to the reimbursement of the City of Jasper in regards to the capital expenditures with the design, construction, and installation of the Waste Water Treatment Plant expansion and related improvements with the USDALoan/Grant.