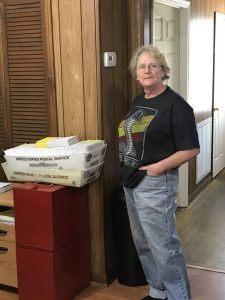 Photo by Susan Kirkland
Sheralle Brindell , a member of the board of elections, stands by absentee ballots that are waiting to be processed.

Early voting is going smoothly  despite long lines and up to an hour wait.

“The only issues we’ve had were with the state system.  The servers bogged down and we couldn’t process voters very quickly on the first two days, but the state had that fixed and the system works great now,” said Julie Roberts,  supervisor of elections.

She said voting in person at 83 Pioneer Road is up to 910, but she anticipates that between now and  Oct.30, they will amass many more.

Prior to early voting, the elections office had received between 2,000-2,500 ballots.  Roberts said. She anticipates a lot more than that number by the end of early voting on Oct. 30.

At October’s board meeting,  the board approved advertising they would process absentee ballots early. They will open the envelops and stack groups of 25 ballots together to make feeding them into the counter easier.

They have scheduled to use  Superior Court Judge Brenda Weaver from Oct. 27-Oct. 30 to process the ballots. The processing will be witnessed by three people.

Roberts said that members of the board of elections should check that there is only one ballot per envelope.

“There is only one oath per envelope and it has to be signed,” she said. “The exception is for military families stationed overseas.”

Cell phones will not be allowed in the courtroom while ballots are processed.

Roberts went on to say that some voters have been flagged for not having proof of identity and registered by mail.

Roberts said while there have been concerns about the voting machines, she is confident the software issues have been dealt with.

“There were discovering candidates disappearing on the ballots,” said  Roberts. “But this was before our system was tested and we didn’t see any of those issues.”

JASPER VOTES ON A MILLAGE RATE