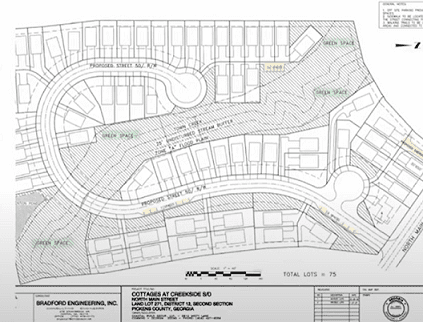 The application for the Cottages at Creekside comes from Coastal Building Group, LLC. The idea, in its current form, is to rezone and develop just over 15 acres of agricultural land into a 75 unit neighborhood located at 855 North Main St. in Jasper. Brian Westbrook, the project’s spearhead, says they have incorporated sidewalks, a community garden, and a gazebo into the design to maximize livability. Cherie Martin, the project’s realtor, says that because of the neighborhood’s proximity to down, she envisions a walkable community with easy access to churches, restaurants, and shopping. Both Westbrook and Martin agree that home prices could range from $209,000 to $250,000. 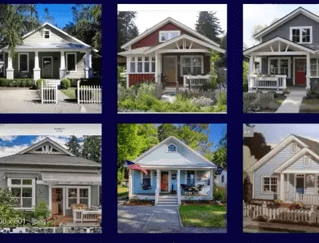 Proposed units for the development.

Before the city council’s vote, the city planning commission took public input on the ordinance at a November 28 meeting. Several proponents who live near the proposed site expressed their concern. Some questioned why developers would want to build in a well-known floodplain. Others had concerns over access, sighting that plans only showed one way in and out.

Chairman Rodney Buckingham pressed Westbrook about the retention pond’s ability to serve the planned units properly. Westbrook reassured those at the meeting that it would. The commission also had concerns over the 81 proposed units on a site that is no larger than 16 acres. At one point, Chairman Buckingham hinted that if developers couldn’t make money from a lesser plan of 53 units, why should the commission approve the ordinance?

Ultimately, the planning commission did approve a nonbinding recommendation to city council with a caveat that developers resolve the issues brought up that evening.

When Jasper City Council took the ordinance up for their February 2 meeting, developers faced even more issues. It wasn’t long before the fingerpointing began. City Manager Brandon Douglas and Brian Westbrook’s communication laps regarding a failed attempt for an advanced meeting gave tension during the Zoom call. These issues were compounded by further confusion surrounding the R3 zoning classification and if the units would be attached or detached.

Neither of the previous issues regarding the number of units, retention ponds, floodplains, or lack of multiple entrances were addressed during the meeting.

After much deliberation, Councilman Kirk Raffield made a motion to deny the ordinance. Not ready to entertain Raffield’s motion, Councilwoman Anne Sneve made a separate motion requesting the Council table the ordinance upon further discussion.

Sneve’s motion on the ordinance did carry by unanimous vote.

In other news, Jasper City Council made a $7,500 donation to the Marble Valley Historical Society. Representing the group, Greg Moore, was appreciative of the generous donation. Moore invites everyone to visit the historic jail off Main Street. For more information about the jail or the Marble Valley Historical Society, you can visit their website.