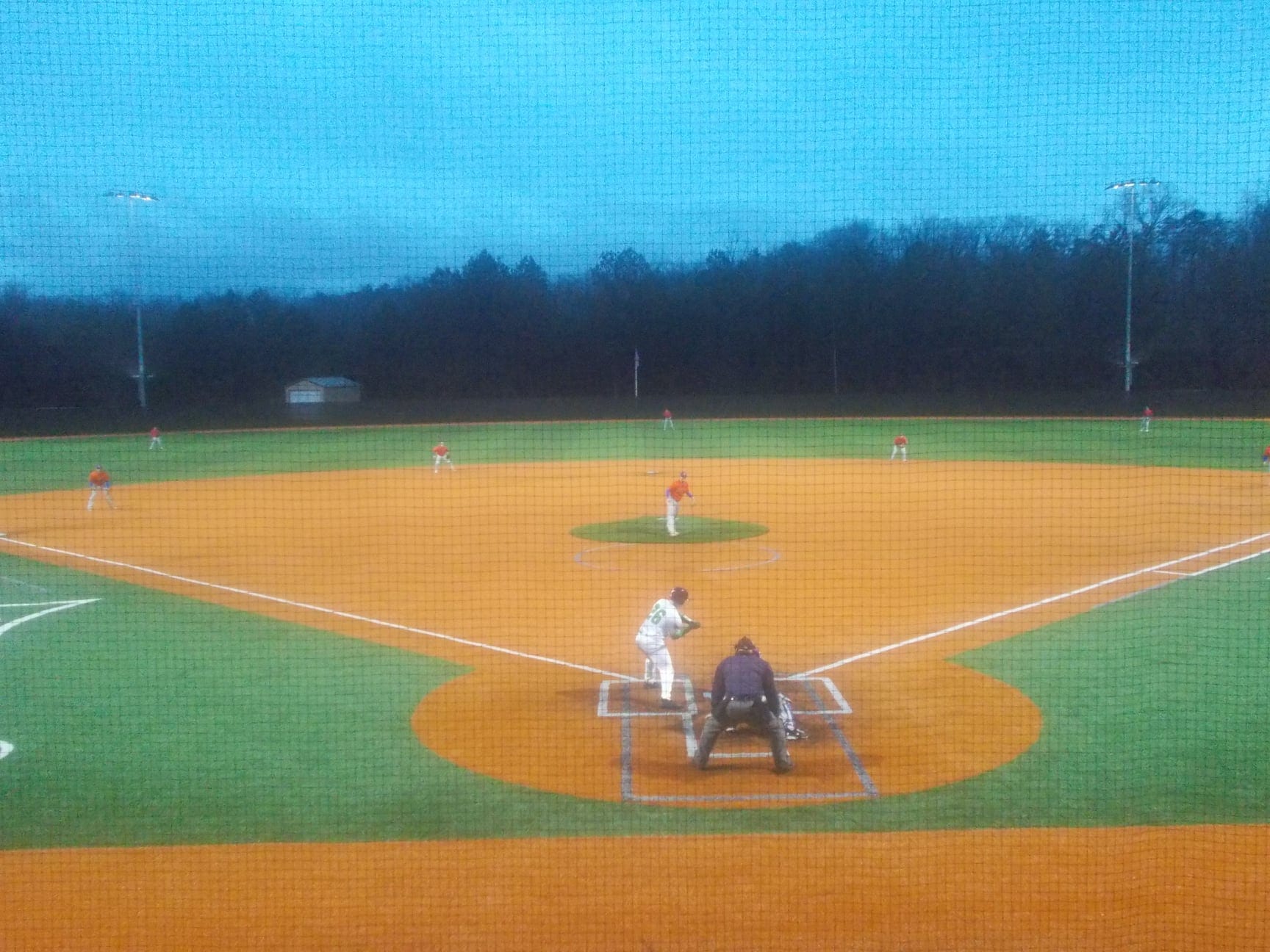 Pickens County, Ga — Tuesday, March 16th was a windy, rainy filled day but it also was game day as the Pickens Dragons (7-5, 1-3) welcomed the Northwest Whitfield Bruins to Dunn Field for game 1 of a  7-AAAA three game set. The Dragons, were coming off of a tough series with Centrall-Carroll last week and looked to get back on track against a Bruins ream that was out of region play last week, and came in with a 10-2 overall record. In a back and forth game that saw both teams trade the lead, Northwest Whitfield came away with a 3-2 win in 8 innings.

Moore continued his impressive outing in the top of the 3rd as he needed just 9 pitches to retire the Bruins and send the Dragons bats back to the plate. In the bottom of the 3rd, Antinozzi and Hunter White both drew 1-out walks. Both runners then advanced to 3rd and 2nd base respectively after a passed ball. Northwest Whitfield, again avoided a potential big inning by the Dragons as we would go to the top of the 4th, Pickens still ahead, 1-0.

In the top of the 4th, the Bruins broke through and plated 2 runs on a double. With 2 runs already in, Northwest Whitfield was looking for more, but Drake Sutton came in and got the last out of the inning with his first pitch to send us to the bottom half of the frame. In the bottom of the 4th, the Dragons would be retired in order. Going to the top of the 5th, the Bruins now led it, 2-1.

In the top of the 5th, Sutton was able to work around a 24-pitch inning as he and the Dragons defense held Northwest Whitfield scoreless. In the bottom of the 5th, the Dragons were able to cash in on a lead off walk drawn by James Tilley as Antinozzi was able to bring him in on a grounder to 2nd base and tie the ball game up at 2 going to the 6th.

The Dragons brought in JP Nunn on in relief in the top of the 6th and Nunn continued his impressive start to the season by retiring the Bruins on 11 pitches. In the bottom of the 6th, with 1-out, Whitmore would secure his 2nd triple of the game. After the home plate umpire ruled catchers interference, Trace Ledbetter took 1st base. Parker Rhodes then drew a walk to load the bases. Unfortunately for Pickens, the Bruins were able to force a popup, and barely make a catch in deep right field, to keep the game tied at 2 going to the 7th.

In the top half of the 8th, things got interesting to say the least. Nunn, got two quick outs to start the inning. The Dragons, thought the third out was made at first base, but a catchers interference call was made by the home plate umpire and awarded the base to the Bruins batter. Later in the inning, with a Bruin runner on 3rd base, the third strike got away from the catcher. Antinozzi, threw it to 1st base where it looked like the runner was out. The field umpire however ruled that the throw pulled the 1st baseman off the bag and the run scored giving Northwest Whitfield a 3-2 lead going to the bottom of the 8th. In the bottom of the 8th, Whitmore got on base for the third time with a 1-out single. The Bruins were able to get the final two outs to get the win, 3-2.

Hunter White: 1-3 with a single and a walk

Seth Densmore: 1-4 with a single

These two teams will play games 2 and 3 of the series in a doubleheader on Friday at Northwest Whitfield. First pitch for the first game of the doubleheader is set for 5:30 pm.