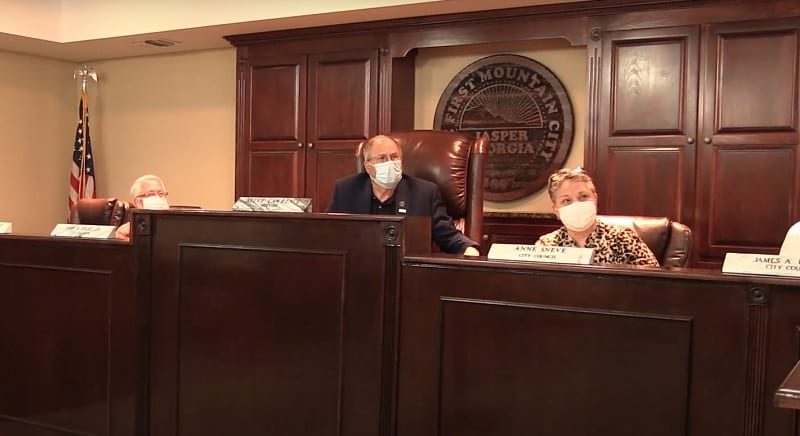 JASPER, Ga. – Plans are now in motion in the city council to return to Fourth of July celebrations in Jasper this year. While last year the city didn’t hold fireworks and had other issues due to COVID restrictions, the council is looking to return this year with a two day event on Saturday, July 3, and Sunday July 4.

According to the presentation by Leslie Miller and discussion in the May meeting of the city council, the plan was set to hold events, the parade, bingo, and celebrations in the afternoon while holding the fireworks display on Sunday along with a band playing at Lee Newton Park.

The parade will be held on Saturday at 1 p.m. this year to coincide and “kick off” the celebration with the major parts beginning around 230 p.m. City Manager Brandon Douglas said the process began months ago with planning and looking ahead. He noted that “signature events” like the Fourth of July show great partnerships between the city and other entities. He noted that there would be costs involved including staff time, stage rental, and other needs from departments like the police who help make the event work.

With that, approval for the event came unanimously with the addition for the City Manager to spend what he feels appropriate “in his limit.”

The council also approve an event in September, furthering their return to general activities and public events. This event, to be held on September 2-5, 2021, is a special event for camping at Lee Newton Park. According to the city, North Georgia Family Partners is reserving the park similar to how they have in the past in order to “accommodate camping for Jeep Fest participants to raise money for the children and families in their program.”

According to the event website, for those who don’t know, “JeepFest raises money for a variety of charities that share one thing in common….they take care of kids. Since the event is hosted by the Sheriff’s Foundation, a non-profit organization, the Board of Directors works each year to identify needs in local, state, and national youth needs to support. Some of the charities that we help include the Georgia Sheriffs’ Youth Homes, the Joy House, Special Olympics for Pickens County, the Boys and Girls Club, the Jasper Youth Sports Association and much more!”

As campers start showing up on Thursday, those getting ready for the event would have places to set up for the whole weekend and using facilities at the training center. The city will not be handling the security for the area, but the motion only approved permission for the usage.