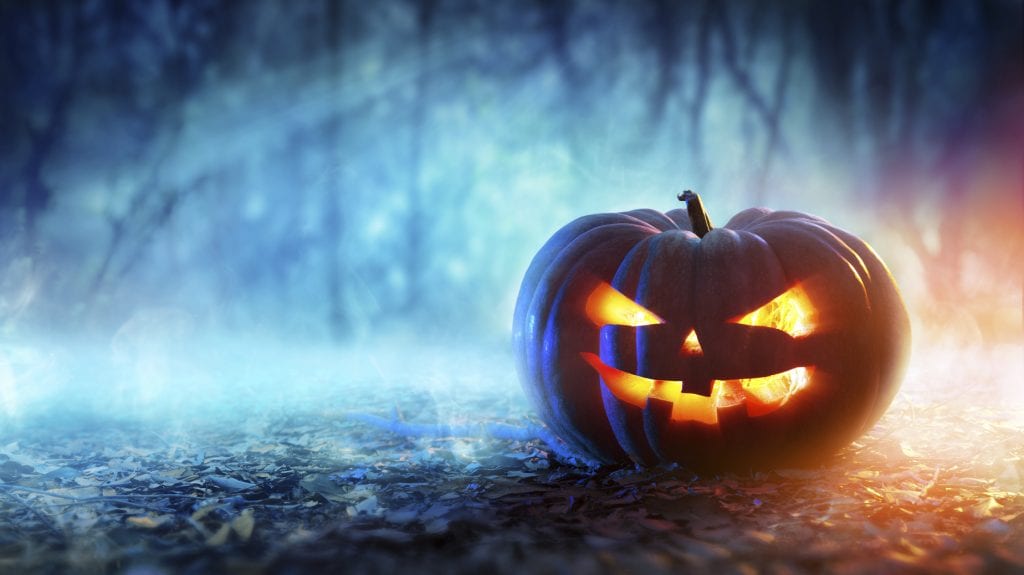 JASPER, Ga. – Pickens County held their downtown Halloween event on Thursday, October 31, 2019 between the hours of 4 PM and 7 PM.

A slideshow of the pictures taken by Fetch Your News may be viewed below! 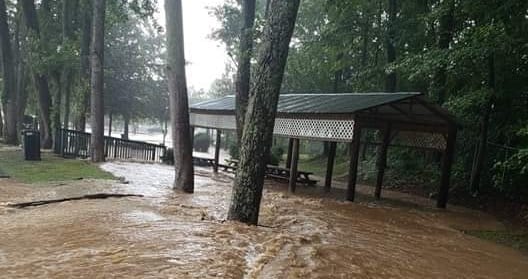 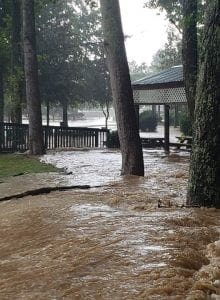 JASPER, Ga. – Parts of Pickens are falling victim to the heavy storms and rain as water levels rise. Citizens are sending in photos of the damage during the storm.

Already cancelling the “Piggin in the Park” event Lee Newton Park, event planners are still trying to look at possibly continuing the event tomorrow at the scheduled time. The National Weather Service did say the storms tonight could have “up to 40 mph wind, frequent cloud-to-ground lightning and very heavy rain.” However, no warnings or watches have been issued specifically for Pickens County as a whole.

While most of the storms are northeast of the county, effects are still being felt in isolated situations like this. For citizens on the east side of the county, near the Gilmer and Dawson County lines, be alert as the storm damage could easily reach and affect you.

Authorities are asking citizens to “be on alert for minor damage to tree limbs and blowing around of light, unsecured objects. Heavy rain will cause temporary street flooding, especially in poor drainage areas, and rising water on creeks and streams. 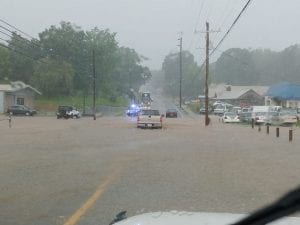 The park is not the only area being affected as another photo from in front of the Speedburger shows the flooding is spreading to other parts of the county.

Police and Emergency authorities are responding to the incidents. Authorities have asked citizens in recent storms to not drive through flooded streets if you cannot see the road as a driver cannot tell if part of the road has washed away.

The National Weather Service has also issued a statement saying, “Motorists should slow down and be prepared for possible loss of control due to hydroplaning.”

JASPER, Ga. – With roughly 25 years of the annual Fish Rodeo, the city is preparing once again for this beloved event.

The Council heard the required request, and subsequently approved, for the Pickens County Sportsman Club Annual Fish Rodeo this month to allow the event in May. Sportsman Club representative Walt Cagle offered fliers to the council as he presented the request. The four-day event will see support for the community, special needs, and senior homes in the area.

Mayor John Weaver called the rodeo “a very special event” in recent years as it has been about a decade at the Cove Creek location. Cagle notes the wired off location will provide stock trout for all who wish to participate. He went on to say that the event not only serves Pickens County, but all who wish to attend and he evens sees response from senior homes in Cherokee.

The council officially provided the proclamation needed for the event to have the Georgia Department of Natural Resources to close off the creek for the event.

Cagle provided the following flier for the council and citizens for information on the event: 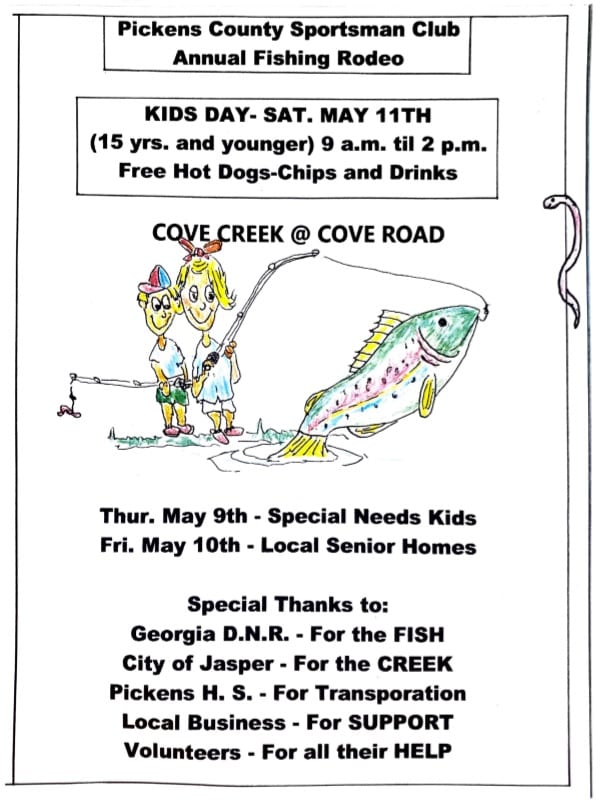 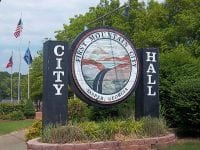 JASPER, Ga. – On the agenda since January, Jasper City Council has been discussing self-funding for medical insurance versus insuring normally as they have been for years. They have had both Matt Bidwell, of MSI Benefits, and Kevin Godfrey, of Godfrey-Downs, looking through their contacts and markets to bring forth proposals to the council for insurance.

The city ultimately went with the Georgia Municipal Association (GMA) recommended by Bidwell and MSI Benefits. Though the original recommendation was a $1,500 deductible plan, the council’s motion approved an alternate plan with a $1,000 deductible. The new plan’s premiums for the city would come to $1,104,163.00, around a $52,000 increase, which is far less than the near $300,000 increase the city was originally looking at during the beginning of the year. According to Bidwell, this plan is just above a 4 percent increase over the $1,500 deductible plan for the city.

The plan also allows, according to Bidwell, for any employee receiving compensation in the form of workman’s comp or a salary from the city to be covered under the insurance. This covers the issue the city had with their current insurance preparing to drop an officer from coverage who was injured in the line of duty.

The city may be closing down North and South Main street once a month in favor of a recurring Chamber event. Setting the events as May through August, the Chamber is attempting to establish the Saturday Social in the Mountains as a tourism event. The issue came before council to close South and North Main Street for the social events. While representatives had no set point of exactly what every event would entail, they did suggest they could include live music, children’s events, food, and other activities. Ultimately approved, the item passed with two votes, as Dr. Sonny Proctor and Anne Sneve abstained due to their involvement with the Chamber.

The council also approved a number of previously budgeted expenses including $14,000 to swap out the Cove Well emergency generator, $11,900 to rebuild pump four across from Shiloh Church, and the previously discussed 3 percent raise for city employees. 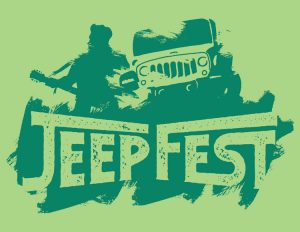 The event has miles of trails and obstacle courses for those attending. All of the trails have different difficulty levels. Those wishing to participate by riding the trails must check-in and register their Jeep first.

Even if you don’t have a Jeep you can still attend the event. Different vendors will be set up, along with live music, and the Pig Pen Family Mud Park.

Pig Pen will have obstacles running, mud to play in, a drag racing strip, and camping.

JeepFest raises money for a variety of charities such as Georgia Sheriff’s Youth Homes, The Joy House, Special Olympics in Pickens County, The Boys and Girls Club, and the Jasper Youth Sports Association.

The event is staffed by volunteers from the Pickens Sheriff’s Office, other public safety offices, and local Jeep Clubs from all over North Georgia ensuring a safe and well organized event in a family-friendly environment. 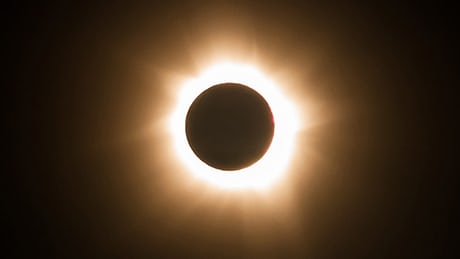 Jasper, GA – Today, August 21, North Georgia will have prime visibility of a national solar eclipse that will begin around 1:05 P.M.

Pickens county will experience 97% of coverage allowing citizens to have an exceptional view of the event. At 2:36 P.M., the event will be at its peak before ending between 3:30 and 4:00 P.M.

With the Georgia Emergency Management Agency expecting over 100,000 visitors to travel to North Georgia for the event, the local school board wants to ensure the safety of all students, teachers, and parents.

Superintendent Dr. Carlton Wilson made the decision to make today a holiday due to the event occurring the same time school would be dismissing.

Public Information Officier Kris Stancil spoke on how the Sheriff’s Office is preparing for the event,

We have brought in additional staff to assist in the expected heavy traffic areas like the look out on Highway 515 and the one on Burnt Mountain Road.

The National Aeronautics and Space Administration (NASA) sent out the following saftey precautions:

Jasper, GA – At this month’s Jasper City Council Meeting, Paul Poore of Jasper Merchants Association discussed the idea of having a new downtown event on November 4, 2017.

Poore has been working with Georgia Z Club and Fair Lady Alliance of Atlanta to arrange the event. Together the groups would bring 70 new model sports cars to the event, for a car cruise-in, in downtown Jasper.

Main Street would be blocked off from 4:00 to 8:00 P.M. to allow different musicians to play, sponsored by Mountain City Auto Parts, and the variety of sports cars.

Poore also explained to the council that the groups coming to town plan to book local hotels and have a wine tasting on Sunday at local vineyards. This would allow both groups to see what Jasper has to offer, being that they are looking to use Jasper for one day of their National Convention next year.

The City Council made the decision to approve the event.

FYN will have more details on the event as it progresses. 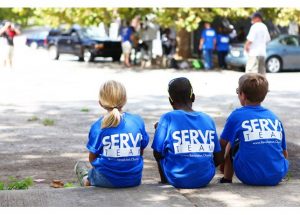 Serve Saturday is one of many ways a church can go out and help our community. Revolution Church hosts the project called Serve Saturday. The projects vary from month to month in order to provide help in a wide range of locations. The event allows people to come together and participate in different odd jobs to make our town better.

Revolution Church of Jasper has been working over the past four months in our community. Most of what they have accomplished so far is high impact/high visibility projects such as painting cemetery walls on Church Street. However, these projects are only leading to more from the church, such as their event this Saturday, July 15 from 9:00 A.M. to 12:00 P.M. the church will be cleaning up the intersection around the Walgreens and Rite Aid, along with the intersection at Hwy 53 and Main Street. Around 46 people signed up to participate in this event.

The Mayor and his staff are thrilled that we have been caring for the city!