JASPER, Ga. – Running for Governor in the State of Georgia, candidate Vernon Jones stopped by Pickens County and their local Republican Party meeting this week to discuss his campaign, Brian Kemp, racism, and the election. 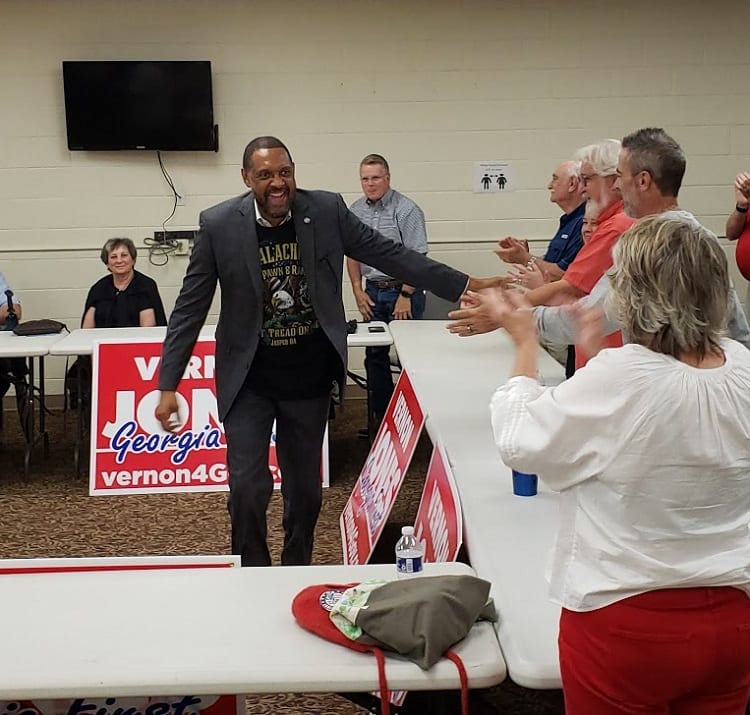 Vernon Jones arrives at the Pickens Room in Jasper, Georgia, to speak with the Pickens Republican Party on July 13, 2021.

With words of encouragement on Tuesday, July 13, 2021, Jones told the over crowded Pickens Room in the bottom of the Pickens County Administrative Building that he was the candidate to return Georgia to the people. Spending much of his time on major issues like the voter rights, elections security, racial divisiveness, and the Democrat Stacey Abrams, Jones told Pickens County Republicans that he is the only candidate who can save Georgia and the only candidate who can beat the democrats “no matter who they bring.”

The Pickens Room had several people standing as every seat was taken. In fact, he spent more time answering questions in the meeting than he did giving his initial speech spending nearly 38 minutes on his speech and nearly 52 minutes answering questions.

Those questions ranged from asking for promises to get rid of the Dominion Voting system to how he could fight against the “biased media.”

A large portion of his time in both his speech and questions, the majorly common theme the Jones addressed was racism and hypocrisy as he said the left can’t play the “race card” against him. He noted how he had been assaulted by a gay transgendered person because he didn’t agree and and follow the democrat party. Jones said he never left the Democrat Party, they left him.

As he spoke about his transition to Republican Party, Jones added how current Governor Brian Kemp betrayed the party and made backroom deals with Stacey Abrams that led to “Stacey’s Law” and the corruption of Georgia’s election process.

Questions continued until, ultimately, Chairman Mora had to call for two final questions and the end of the meeting. However, this did not stop one more act as one of those present asked to pray for Jones before he left the meeting. 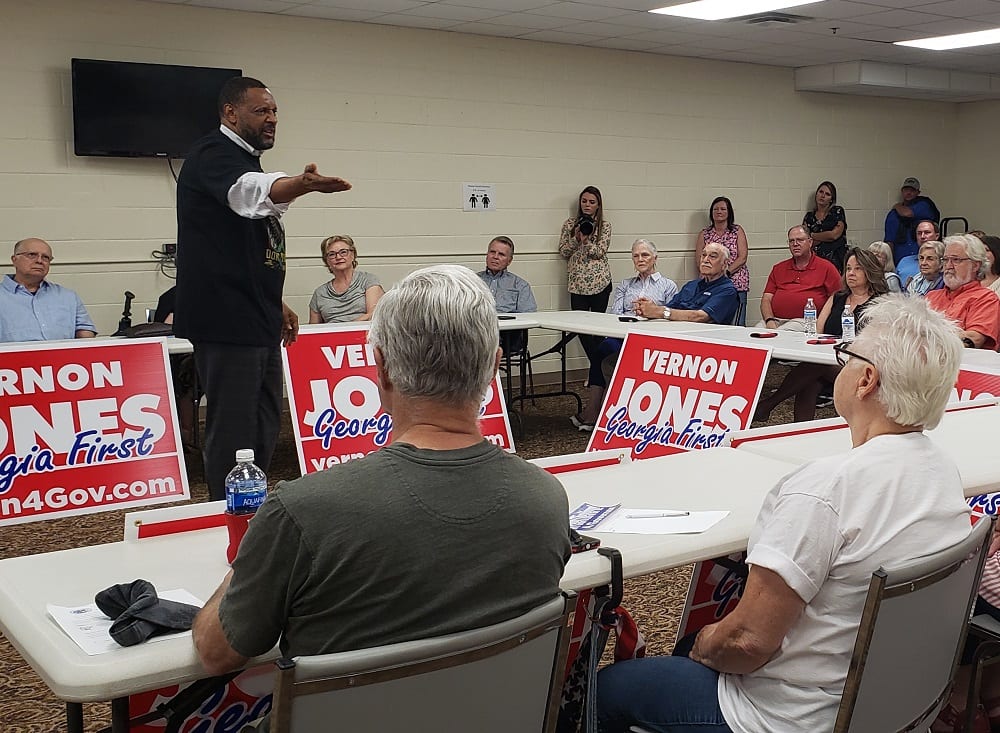 Jones has been endorsed by other Republicans and current Trump supporters like Rudy Giuliani. A case that, he said during the meeting, came from his early support, even as a Democrat, for Trump.

Support came from others in the room as well. Gina Rolsten, a newer member who only got into politics in recent years, said that she had been interested to hear Jones speak as she has been excited to have him as a candidate. Having met all the primary candidates, she said that Vernon Jones was “by far” the most in line with what she believed Georgia needs. Rolsten said she had heard Jones speak before the Pickens meeting, but was very interested in seeing others come out to listen. When asked, Rolsten said she had no care that he had been Democrat saying, “I know what his values are. I know what he stands for.”

Jeri Haid said she had been invited by a friend to listen to Jones. Also unmoved by his former Democrat status, Haid said she believed a lot of Democrats are starting to realize they are “old school” Democrats. Haid noted that even members of her family, who have been lifelong Democrats, are starting to pull away from the party as they don’t agree on the same values anymore. She wants a more united nation as she said she just wants us to be free again. She said, “If you want to go to church, go to church. If you don’t want to go to church, don’t go to church.” Be free to do what you want.

It was a them echoed by Jones who said he didn’t care what people wanted to do, he simply wants to end the corruption and the culture of telling others who and what they are. He gave an example quoting President Joe Biden as he said if you don’t vote for me, you aren’t black.