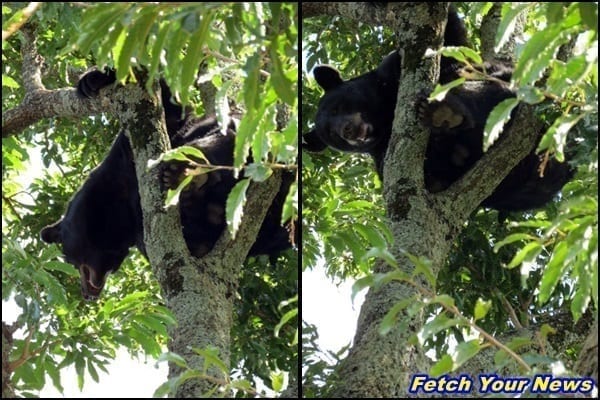 At last night’s Jasper City Council meeting, Lonnie Waters said now that spring has arrived the bear sightings in town have begun again. With the bears being attracted to the city’s streets and neighborhoods already, a reminder of the new ordinances adopted earlier this year is timely.
Please remember to not put table scraps or garbage outside your home and try to not put your curbside trash containers out until pick-up day. Previous article regarding the ordinance can be seen in the following:

An animal control ordinance first discussed in January has now become an official rule in the city of Jasper. With the modified second reading last night and a vote of 4-1, the ordinance has now passed. The gist of the ordinance is that any “reckless” (i.e., throwing out table scraps, purposefully feeding) wildlife other than birds can result in fines or court appearances.

With ever-increasing bear sightings in town and the case of a rabid raccoon that bit a resident last fall, the animals dependence on humans grows as people continue to improperly dispose of food articles. While some may enjoy the interaction with the resultant wildlife it does pose a danger and neighbors shouldn’t have to deal with the nuisance or possibility of a run-in due to losing their natural fear of humans.

Animal Control Officer Lonnie Waters stated people shouldn’t worry that he will be patrolling looking to catch violators but the ordinance is a way to deal properly with any complaints that come in. He stressed he would seek to speak to the resident to help them understand what they ordinance is and how to be compliant. The step to fines and/or court would be taken only after one willfully broke the ordinance once being advised they are in violation.

All council members voted in favor with the exception of John Foust who objected to the statement that anything past bird feeders would be a violation, calling bears “souped-up opossums” who will seek out bird feeders also.