JASPER, Ga. – The citizens of Pickens County breathe a sigh of relief today as County Commission Chairman Rob Jones shares information on funding for repairs of the damage that has shut down Jones Mountain Road close to two months ago.

Citizens have been avoiding the area since February 22, 2019, when the county closed the road after major storms washed out the ridge under the road and caused part of the pavement to crumble away. The road is still closed today, but Jones says this will change soon as the funding will allow them to move forward with a proposal from GeoStabilization International to reopen the road.

The county has secured $1.3 million in funding from the Georgia Transportation Infrastructure Bank with the SRTA (State Road and Tollway Authority as well as an additional $500,000 from the state’s emergency LMIG (Local Maintenance Improvement Grant) to cover the estimated $1.8 million project. These estimations came when Chairman Jones called the event a “major disaster” in early March. 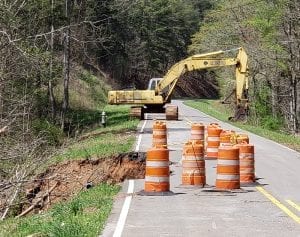 Jones says that additional companies have spoken with the county about their own proposals for the repairs. But utilizing these funds requires the project to meet and adhere to DOT guidelines. Additionally, operating under the emergency status for the county, they will not wait for a bid process that could take up another two months before any repairs begin. Instead, the county is moving forward under the proposal with GeoStabilization International.

While the road will take upwards of two months to fully repair, Jones reiterated his intentions, as he explained in the March Commissioners’ Meeting, to get the road open for use of a single lane within the next two weeks. As part of the proposal, this quick turnaround will address the extra 4.7 miles that both citizens and emergency services must travel to go around the slide area.

While some points of the project are still up for negotiations in the upcoming pre-construction meetings, Jones asserts that the funding will cover the entirety of the project. However, he did note that the county could reach into the $100,000 contingency funds should the need actually arise.

Jones noted that receiving the state funding would not have been possible without a major concerted effort. Pickens County Finance Director Faye Harvey in conjunction with state representatives Steve Gooch, Rick Jasperse, andChuck Payne worked alongside Emily Dunn on the State Board to make a last-minute push for state involvement to bring funds to relieve the citizens from such a major financial impact from this emergency.

Citizens of Pickens should begin seeing the repairs and construction beginning soon and in a matter of weeks, access through the entirety of Jones Mountain Road should be returned, if only a limited one lane access.