JASPER, Ga. – Pickens saw celebrations and attendance from many officials as all three members of the Pickens County Board of Commissioners met to cut the ribbon on the new Tate Fire Station.

The new facility is the second-largest fire station in Pickens County now that it is open and hosts larger drive-through bay doors to accommodate future plans for equipment and hosts the fully drive-through bay area to prevent the larger trucks from needing to back out.

Pickens Fire Chief Sloan Elrod said, “I want to thank all the citizens that voted on SPLOST, without SPLOST this would be very tough to be in this building, to have our new trucks.”

Several officials from across the county were also in attendance including representatives from the Pickens Board of Education, Cherokee Fire Fighters, the Copeland family who sold the land to the county for the station, the Pickens Sheriff Office, and Jasper Fire Department among others.

With those wider bay doors on the new fire station, Pickens Commission Chairman Rob Jones said this is part of a direction towards housing a Quint. A quint is a multi-use fire truck that serves multiple purposes based on needs including pump, water tank, fire hose, aerial device, and ground ladders.

Jones said that the board is looking at better and bigger equipment for the community. Part of the opening of this station and the continuing goal that Jones noted is lowering the ISO Rating. This insurance rating, as noted in previous fire station openings and other counties, affects the insurance costs. 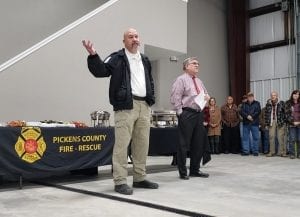 With Tate’s upgrade into the new station, Jones said the county’s rating is down to a four. Continuing along with past years planning to increase the fire department and lower the rating.

Additionally, the new station will also see the change to constantly hosting three paid firefighters every day according to Elrod. Jones echoed this saying they are still relying on volunteers in the county and want to continue utilizing them even though they will constantly have three on staff in Tate at Fire Station 2.