JASPER, Ga. – A special called meeting of the Pickens County Board of Education met this week and put the final approval on the board’s millage rate.

Upon calling the meeting to order and approving the agenda, however, the Pickens County Board of Education retreated to an executive session to discuss, as Board Chair Sue Finley read, “the appointment, employment, compensation, hiring, disciplinary action or dismissal or periodic evaluation or rating of a public officer or employee. Or to interview applicants for the position of superintendent.”

The board took no action upon exiting executive session, but instead moved on to the regular agenda.

An official motion came to approve the Board of Education’s millage rate at 14.30 mills. Board Member Aaron Holland made the motion with a second from Steve Smith.

This sets the millage rate 0.53 mills lower than last year and continuing the steady decline according to the school’s 5-year history of the tax levied. 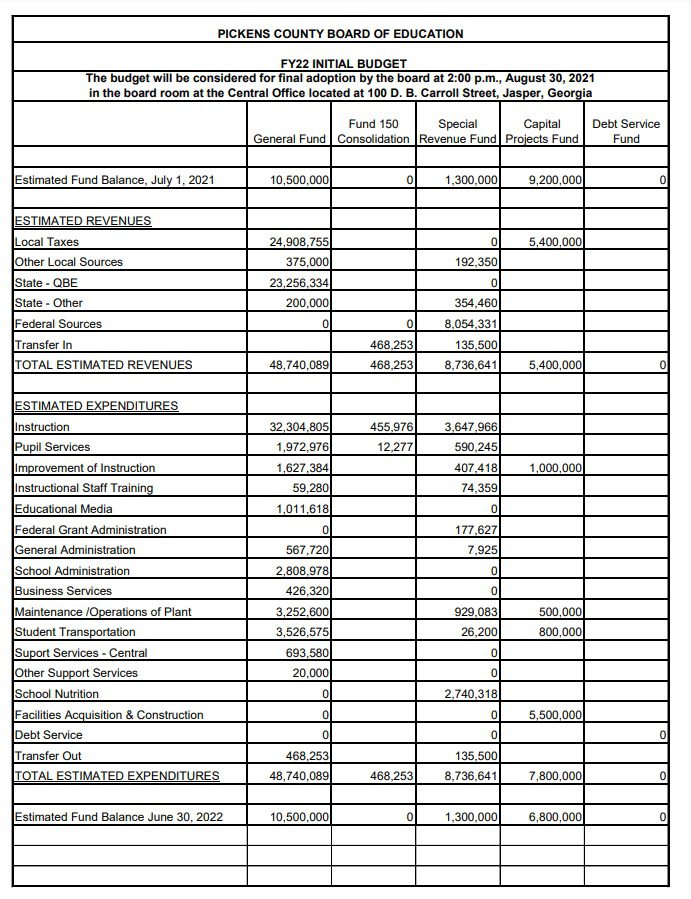 Finley said, “I would like to thank Mr. Young and Ms. Smith for their hard work to make this happen to bring our budget to the point where we can have our millage rate at 14.30 and still have our budget in the black. Thank you very much.”

A unanimous vote for both the millage rate and the FY 22 budget saw the board passing an initial budget for the year.

That budget totals $48.7 million, estimating that the school system’s fund balance will remain at $10.5 million.