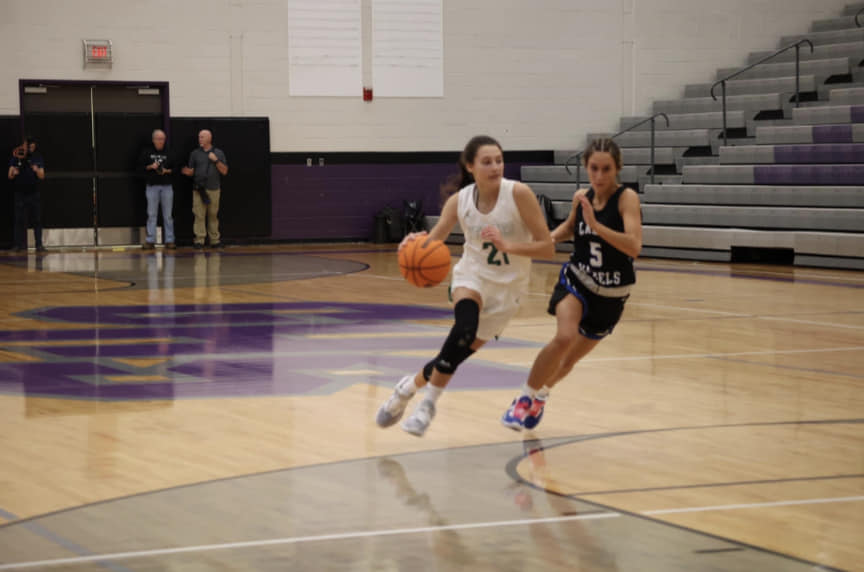 Ellijay, Ga — As the weather starts to cool, it means that we are getting into basketball season. On Saturday, November 19th, the annual Thanksgiving Tournament that features Copper Basin, Fannin, Gilmer, and Pickens, began. This year, it is being played in the newly redesigned gym known as “The Cage” on the campus of Gilmer High School. The first game of the tournament featured a pair of top ten teams going at it as the #6 team in 3A the Pickens Dragonettes, took on the #4 team in 2A, the Fannin Lady Rebels.

For the Nettes, it was their second game on the young season as they defeated Cherokee Bluff 71-25 on November the 12th to open the season. For the Lady Rebels, it was their first “official” game of the 2022-23 season, but they did look impressive in their scrimmage earlier in the week. The Nettes, led throughout this one and came away with  the 54-40 win.

In the first quarter, Pickens got on the board quickly as Emma Gleason made the layup after the feed from Caroline Mullins and converted on the and-1 to give the Nettes a quick 3-0 lead. Ava Queen got the Lady Rebels on the board with a layup of her own to make it 3-2. After a steal by Fannin, Reigan O’Neal went 1-2 from the free throw line to tie the game up at 3. The Nettes, would come up with a takeaway of their own and Emmie Moore would find Gleason under the bucket for two to make it 5-3. Madison Powell took the hand off from Gleason and made the layup to make it 7-3 Nettes. Highly touted Lady Rebel Courtney Davis got into the score book with a scoop layup to make it 7-5.

After a block by Bella Hopkins, Freshman Ellison Steinhauer took it down the floor and got fouled on the layup attempt. Steinhauer would go 2-2 from the line to make it 9-5 Nettes. O’Neal, would answer right back with a tough layup in traffic to make it 9-7. Hopkins got in on the scoring with a three to make it 12-7. Moore used a nice pump fake to drive into the lane for the layup. The free throw was good and that made it 15-7 Nettes. After a back and forth first quarter, Pickens led Fannin, 15-7.

To begin the third quarter, Ellie Cook of the Lady Rebels gave Fannin the first points of the second half as she caught the deflected pass and made a nice reverse layup to make it 29-14. Mullins, got her first two points of the ball game as she answered on the other end with a nice spin and drive to the bucket to make it 31-14. Davis, then raced down the floor and made a layup as the two teams were now trading buckets. After the Nettes kept a possession alive with an offensive rebound by Gleason, Mullins was fouled driving to the basket. She made 1 of 2 to make it 32-16 Pickens.

Davis, using her speed, drove down the floor, went underneath the basket, and found Cook who connected on the three to make it 32-19. Mullins, was able to draw the foul on the next trip down the floor and make both free throws to give the Nettes a 34-19 advantage. Jayden Bailey, was able to grab the rebound and get the bucket. After a miss on the free throw attempt, the Lady Rebels were able to get the rebound and get another tough bucket. This time by Riley Reeves. She completed the and-1 and it was down to a 34-24 Pickens lead.

Steinhauer, setteled things down just a little as she went 2-2 from the line to make it 36-24. Davis, again using her speed, raced down the floor for the layup to once again make it a 10 point game. After a no call on one end, the Nettes were able to drive down the other end a connect on a three by Steinhauer. Her third of the game. O’Neal, was able to drive down the lane and went 2-2 on the free throw line. Mullins answered with a layup to make it 41-28. Reeves, would  get fouled on the layup attempt and go 1-2 from the line to make it 41-29 Pickens going to the fourth.

Davis, got the scoring started in the fourth with a layup to make it 41-31. Mullins, then did one of the many things she excels at and that’s driving down the lane and getting contact on shot attempts. Mullins would go to the line and make both shots to make it 43-31. Hopkins then collected the rebound off the Reeves miss and drove it the length of the floor and made the layup to make it 45-31. After a steal by the Nettes, Mullins had a breakaway all alone and made the layup to stretch the lead out to 47-31. Gleason, after getting a steal, passed it ahead to Steinhauer. After missing her first attempt, Steinhauer grabbed her own rebound and got the put back.