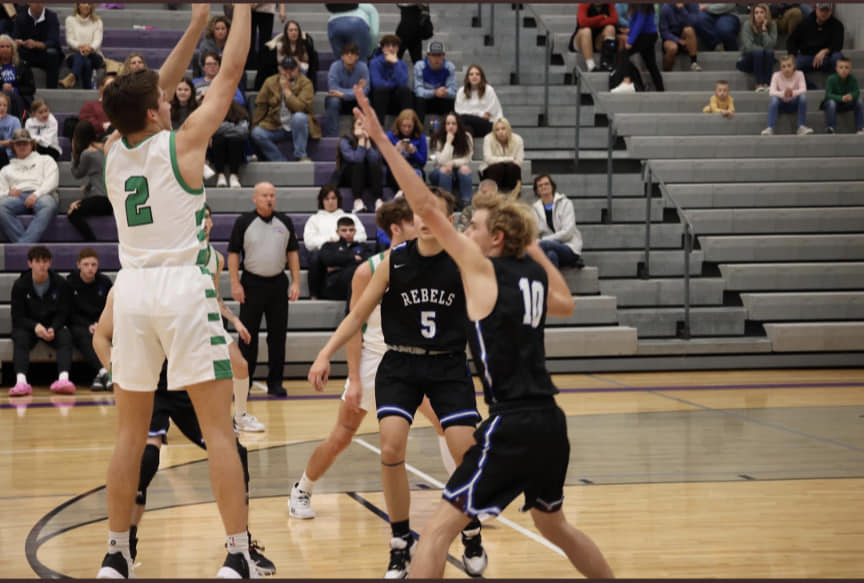 Ellijay, Ga — After the Nettes picked up their second win on the early season, the Pickens Dragons looked to open their season with a win of their own as they took on the Fannin Rebels on the first day of the annual Thanksgiving Tournament on Saturday, November 19th. The Dragons, did not have a scrimmage game while the Rebels did. The Rebels, won their scrimmage game earlier in the week after a nice come back. After a big shooting night for the Dragons, who were led by Caleb Lanford, who had 33, Pickens came away with an 84-53 victory.

The Dragons got on the board early with a corner three by Lanford to make it 3-0. The Rebels beat the press shown by Pickens and Luke Davenport hit a mid range jumper to make it 3-2. Nice passing by the Dragons led to an open three point attempt by Lanford and he connected to make it 6-2. The three pointers were flying early and often for Pickens in the first quarter as James Tilley made his first attempt to make it 9-2 Dragons. After a foul on the floor by Pickens, Fannin ran an inbounds play to perfection as Ben Bloch was cutting wide open underneath the basket for the layup. That made it 9-4. The Rebels, then went 1-2 from the line to cut the lead to 9-5.

Lanford, then hit his third three in the first quarter to push the lead to 12-5. After beating the press again, Jordan Richardson drove into the lane and connected on a floater to make it 12-7. Bloch, went to the line for three shots after being fouled on a three point attempt. Bloch would go 2-3 to cut the Dragons lead down to 12-9. On their next possession, Lanford used a good pump fake move to set up an open mid range shot. Lanford made that bucket to make it 14-9. Lucas Hanson would get fouled and make a pair of free throws to cut the Pickens lead to 14-11.

On the next Dragons possession, there went that man again as Lanford hit his fourth three of the quarter. Fresh off the football field, Isaiah Williams picked up a block on the defensive end, then grabbed an offensive rebound on the other end leading to a foul. Williams would go 1-2 from the line to make it 18-11. After the Rebels beat the press, Cole Gribble got a layup to go to make it 18-13. After a steal by Mccord Purdy, Purdy found that man again and Lanford hit his fifth three of the quarter to make it 21-13. On the next Pickens possession, Camden Dunn made a great pass to a cutting Jaden Stewart to make it 23-13. Stewart then got an offensive rebound and made the put back to give the Dragons a 25-13 lead after one.

Hanson, used a pump fake to drive the baseline for a layup to make it 37-31. Wallace, finished the bucket through contact and made the and-1 to stretch the Dragon lead out to 40-31. After a turnover, Dunn found Lanford cutting to the basket and he made the hook shot. Lanford got fouled on the shot and he made the and-1 to make it 43-31. At the half, Pickens led Fannin by a score of 43-31.

Lanford, kept his hot shooting from the first half going into the second half as he opened the third quarter with his seventh three pointer of the game to make it 46-31. After a turnover by the Rebels, the Dragons took advantage as Dunn found Seth Cronic under the basket for his first points of the ball game to make it 48-31. Fannin, was able to end the mini run with a floater by Bloch to make it 48-33. Dunn, had a nice series of plays as he had a block on defense, drove down the court and got fouled. Dunn would go 1-2 from the line to make it 49-33. Wright, did a nice job of following his shot as he missed the reverse layup, got the rebound, then made the layup to make it 49-35.

Bloch, fought for and got a pair of offensive rebounds, and then got fouled. He went 1-2 from the line to make it 49-36. Bloch again made some nice moves to make the layup and cut the Pickens lead down to 49-38. Wright then drove into the lane and made the layup against contact. He completed the and-1 to make it 49-41. The Dragons, needing a bucket, got one as Tilley hit his second three of the game to make it 52-41. A steal by Pickens led to a put back bucket by Dunn to make it 54-41. On the other end, Gribble got a bucket to make it 54-43.

Late in the shot clock, Dunn drove into the lane, made the layup, and got fouled. Dunn would miss the free throw, but hustled down the court to gather the rebound and threw the lead pass to Tilley, who finished the play with the layup. Wright, made another nice drive to the basket and finished the layup to make it 58-45. Just before the third quarter buzzer, Tilley made a tough layup to make it 60-45 Dragons going to the fourth.

To start the fourth, Lanford made a tough turnaround jumper to make it 62-45. A steal by Lanford led to another three by Tilley. His third of the game made it 65-45 Pickens. A great inbounds play by the Dragons led Stewart to finding Lanford under the basket to make it 67-45. Another steal by the Dragons led to a fourth three pointer by Tilley to make it 70-45. Bloch, ended the Pickens 10-0 run to begin the fourth as he drove in for the layup to make it 70-47. Lanford did a good job of getting the rebound off of Stewart’s miss and got the put back to make it 72-47.

A nice look by Stewart led to a bucket by Dunn. Dunn completed the and-1 and that made it 75-47. After a steal by Williams, he found Lanford on the outlet pass, who then found Purdy for the three to make it 78-47. Parker Davis, had a nice pump fake move that led to a floater for the Sophomore to make it 80-47. A nice pass led to a nice inside basket from Isaiah Angel to make it 80-49. Parker Davis, again made some nice moves on his way to the basket as he made his second bucket to make it 82-49. After the Rebels went 1-2 from the line, they collected the rebound and Hanson made a three to make it 82-53.

Just before the end of the game, Dodge Davis, grabbed his own rebound and made the put back to give us a final score of 84-53 in favor of the Dragons.

On Monday, these two teams will be back in Ellijay for the second day of the Thanksgiving Tournament. Pickens, will take on the Copper Basin Cougars at 4:30, and Fannin will take on the hosting Gilmer Bobcats at 7:30.